There is Work to be Done

and [they] said, “Men of Galilee, why do you stand looking into heaven? This Jesus, who was taken up from you into heaven, will come in the same way as you saw him go into heaven.” 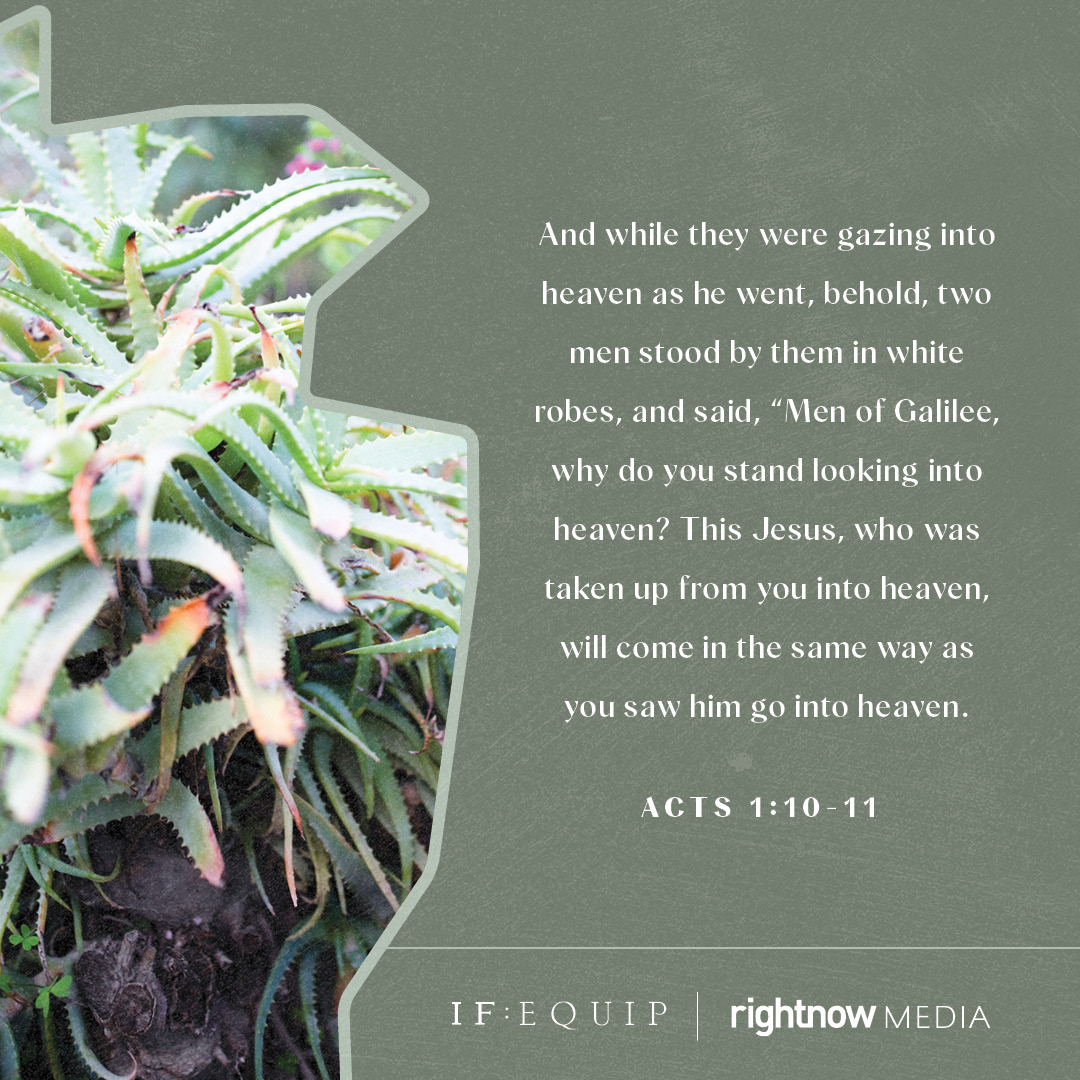 When Jesus appeared to Mary Magdalene, he told her not to cling to him (John 20:17). A few weeks later when he ascended into heaven, the disciples were asked why they were standing about gawking. There was work to be done. A charge was given in both instances to go and tell, not to stagnate in the past but to push forward with the message they had been commanded to share.

The place where Jesus ascended into heaven and gave the charge to those he left behind was the Mount of Olives. Located on the eastern side of Kidron Valley, it is the hill that faces the old city of Jerusalem. It earned its name for the olive trees that once covered it and is an important location throughout the Bible.

King David ran from his son Absalom during the rebellion across the Mount of Olives (2 Samuel 15:30). It is the hill on which King Solomon built high places for the gods his wives worshiped (1 Kings 11:7–8). Ezekiel had a vision that “the glory of the Lord” was present on the Mount of Olives (Ezekiel 11:23), while Zechariah prophesied that God would stand in this spot and it would split in two (Zechariah 14:3–4).

Every time Jesus traveled from the temple to Bethany, the route would take him over the Mount of Olives. His triumphal entry to Jerusalem was from this location (Luke 19:29). It was here he wept, knowing the city would one day be destroyed (Luke 19:41–44). Jesus answered questions and shared many parables under the shade of those olive trees. An audience seeking God was waiting for him always on the Mount of Olives. It was where those who traveled to the temple would sleep and would continue to do so up until the destruction in AD 70.

In the years that followed Jesus’s ascension, what were the conversations beneath those trees? Perhaps hushed whispers filled the air of a Messiah who had already come, risen from the grave, and ascended into heaven in the very spot where they now slept. Did they speak of the men and women who witnessed the event? Were there rumors of where they had gone and what they were doing?

go into all the world

The location was significant as the starting place for what was to come. It was the beginning of a new movement, a new commandment to love as Jesus had done.

Those who had watched Jesus ascend stood in awe, possibly trying to process all that had happened over the last three years. They had expected liberation from Roman rule led by a Jewish warrior king. Instead, they were given a manger-born Messiah who loved them unconditionally and challenged them to go out into the world, loving the unlovely and unloveable with the same boldness. His death had been a crushing blow. But then, a resurrected Christ! He breathed new, spirit-filled life into the future. Their faith had been strengthened and the power of God was undeniable.

The men in white robes who appeared asked them why they waited. This wasn’t where Jesus told them to stay. He told them to go. There was urgency in the command because he would come back again but at a time no one could predict. Perhaps it was in this moment that some of the parables Jesus had shared began to become clear in their minds. Jesus had a way of telling stories that slowly unwrap for us as life makes us more aware. The the ten virgins who weren’t prepared for the long wait. Perhaps in this moment the reason for all they had seen and witnessed suddenly made sense.

What has God been placing on your heart lately to go and do?

Serve others and love them well.

I could write a very long post about this one, but I am going to keep it simple: trust.

To become more involved with my church, join more groups and volunteer in the ministries. The time of my being selfish about my love for God is at an end and I need to share his love more

I’m not sure. I feel like I’m tossing about on sea with no real direction. One day is the same as the one before and will be the one after.

He’s been placing on my heart to learn more of him and build an intimate one on one relationship with him! I’ve learned that the church is not a building but it’s all of us disciples who represent Jesus and when we go out into the world our lives draw people into him!

God has been placing int in my heart to create a platform which is a free , open and safe space for younger individuals to speak on important life topics , learn about their behavior and behavior of others and grow . Ive mentored the younger group for years and want to make an impact at a bigger capacity . I have been struggling with consistency

I don’t know exactly what He’s telling me to do, but I keep receiving the message, "Life is not all about you Kristine." So I know He’s wanting me to be seeking Him and His plan and putting others before me.

To be free. To relax. To trust. All of those things I can feel Him telling me to do but I now I actually have to trust and let go and go to the Lord.

You know what? Freedom is my word for 2021! Learning to relax, trust, and let go is a life-long journey (that comes in many, many shapes and sizes) , and one that can be a lot harder for some of us than others (ask me how I know:)). But it is for freedom that Christ has set us free (Galatians 5:1) … not so we can do whatever we want of course, but so we can keep in step ~ in harmony ~ with His spirit in us. A spirit of love, joy, peace, patience, kindness, goodness, faithfulness, gentleness, and self-control. (Galatians 5:22-23) A spirit that brings Life to us and everyone we encounter. Because where the Spirit of the Lord is, there is freedom! (2 Cor 3:17) 🤍🤍🤍