As he said these things, all his adversaries were put to shame, and all the people rejoiced at all the glorious things that were done by him. 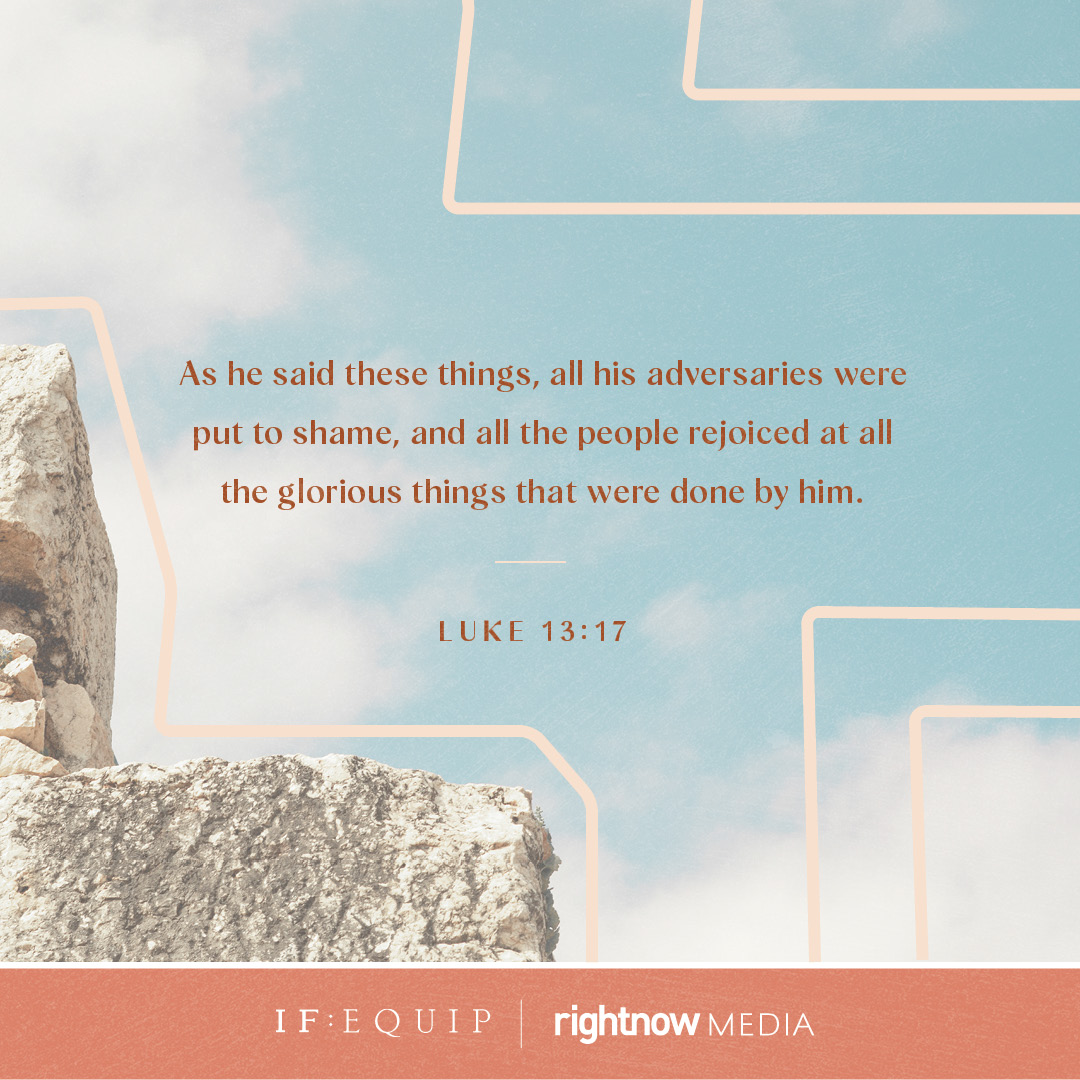 This week, we’ve seen the miraculous, healing power of God in the lives of women. Each story has shown us the incredible value that God has for healing women of all ages. We’ve seen Jesus’s encounter with women who had been sick for only a little while. Others, like the woman with an issue of blood, had been sick for quite a while. Today we meet another woman with a years-long illness. Luke 13 introduces us to a woman who had been crippled for eighteen years. Eighteen years. Unlike the woman with the issue of blood, this woman was able to enter the temple and interact with her religious community. However, she was still in pain. Due to an issue with her spine, she was permanently bent over. How painful it must have been!

All of that changed once Jesus saw her. One Sabbath day, he called her over to himself and laid his hands on her (Luke 13:12–13). Immediately, she straightened up, something that she had not been able to do for nearly twenty years. What was her response? She began to glorify God. Can’t we imagine the tears of joy and relief she must have cried that day? And wouldn’t we expect those around her—those who knew of her years-long disability—to rejoice with her? Something else happens instead.

The time and place of the woman’s healing angered the ruler of the synagogue. The Jewish leaders in Jesus’s day had imposed strict laws on top of the Mosaic law. Healing on the Sabbath day was considered an act of work and thus prohibited. However, Jesus rebuked the religious leaders and insisted that the Sabbath was the perfect time for this woman’s healing to occur. But Jesus didn’t just call her a woman. He called her a daughter of Abraham.

Notice how Jesus, in a few sentences, showed how valuable this woman was in his sight, calling her a daughter of Abraham. Let’s not miss the significance of this phrase, which certainly wasn’t lost on the religious leaders. The Jews took great pride in being the children of Abraham, nearly considering themselves religious royalty.

Jesus not only showed the value of this woman by healing her, but with one phrase, he revealed her true identity. As a daughter of Abraham, she was entitled to healing and restoration as much as anyone else. And so are we.

The Scriptures have much to say about our inheritance and our identity and all of the benefits we receive because of who we are in him. Nothing is too great for Jesus’s healing power in our lives. Not evil spiritual forces, not culture, not human-imposed rules.

As daughters of someone far greater than Abraham, we should expect the same love, the same care for our lives that Jesus gave to the woman. As John wrote, “See what kind of love the Father has given to us, that we should be called children of God . . .” (1 John 3:1a). No matter how long we’ve been in our emotional or physical state of illness, he is eager, willing, and able to make us whole.

What lies has someone communicated about your identity, either in word or action? What biblical truths from today’s reading can you use to help fight those lies?

I have been told and made to feel worthless, but my God says I’m fearfully and wonderfully made and that I am a child of God.

The misconception that lies in my head that I am not valued and appreciated has been troubling me and I’ve been using this as an excuse for everything I do and do not get recognised for. From today I’ll whisper to my inner being that I AM THE DAUGHTER OF GOD, an Heir with Christ. Not because I didn’t know this, but because I’ve never lived my true identity. It’s like I didn’t know what I have been entitled to all along. I pray that God sees me through this reminder

There have been times in my life where the people around me would tell me everything bad going on in their lives was my fault. I was blamed for so many different things, most of which were obviously not because of me. Being of low self esteem and incredibly naive, though, I believed almost all of these lies about myself. It put me in an incredibly dark place. God is helping me realize that there are going to be many times in life when others will try to make me feel guilty for things I shouldn’t. He’s also showing me that I do have to believe them. These lies are not what Jesus would want me to give in to. He would want me to stay strong and know my worth.

There was a painful incidence where someone spread lies about me to tarnish my reputation at work. I cried for days and one day a Godly woman called me and asked me if those words were true and I told her they were not then she said wipe your tears and cry no more and don’t waste your energy on the lies then! I learnt a lot from that experience. I always thought I could try to explain my situation to people but I learnt that was impossible because how many people would I need to talk to each time and how many would understand? Then I learnt all that matters is what God thinks of me and not man and I found such great comfort in this truth. I also learnt that the Devil will try anything and especially those we trust and that are close to us, to make start doubting ourselves so we don’t do God’s work or believe in ourselves so the trick is to know the word and focus on God alone. Amen. God sees the heart and soul while man always looks at outward appearance which holds little value. Amen.

I am His daughter, that is more important than what i think or what anyone else thinks. He values me more than i could ever imagine and that is what matters. This is the truth i chose to stand with.

I was always had self inflicted pain meaning
I allowed my circumstances of what life looked like to define my true self!
For example I thought something was wrong with me
Being single
Nothing is wrong
I am a Daugther of the king of kings
He loves me unconditionally
Jesus will bless me with my husband in his perfect timing
Until then I am content because Jesus is my everything

I really can’t think of any specific lies that someone has communicated about my identity. What I learned specifically from this lesson is that Jesus’ healing extends beyond rules, regulations and the expectations of man! He took time to heal the crippled woman on the Sabbath, which was not acceptable according to the religions leaders! His love and power reigns over all!

Someone has committed lies about me not being supportive/ loving friend years ago. If that should arise again I can fight those lies by stating that God knows me and loves me for who I am , and that I am God’s daughter. A child of God loves thy neighbor, is generous, kind, and respectful to other and speaks the truth in love.

Lies I have heard about my identity or actions or secrets of others talking about me or judging me have always hurt me. I think about how others feel me all the time, I mean that’s human nature. Yet what I learned today and what could help me is remembering this: it states above, “ Nothing is too great for Jesus’s healing power in our lives. Not evil spiritual forces, not culture, not human-imposed rules”. No evil can rule over the truth of God. At the end of the passage it says that He is eager and willing to make us whole! Jesus can heal us! No judgement, no cruelty should ever override us. He loves us. God made us and He is the one who truly wants us.

Yes! He is the One who truly wants us!! Keep listening for His voice Abigail…through His word, through song, through others who love and worship Him too. Jesus wins, past – present – future! ♥️

Someone very close to my family is walking through a dark season ~ she is angry, grieving, and desperately grasping for control. Recently, as in within the last few days, she has said some deeply hurtful things to us, including that I am a failure.
The thing is, I know I’m not perfect ~ never have been and never will be. But mercy, how I’ve given my whole heart in trying to love her well over the years…and trusting Him to redeem the places where I haven’t.
Words sting and the enemy sure will use misplaced and miscommunicated untruth (lies) to steal, kill, and destroy. But as a daughter ~ His accepted and unconditionally loved daughter ~ I will keep crawling my way to Jesus, morning by morning. I will fight brave to hear His tender, healing voice above every other one.

Jodie,
Be encouraged- remember what Jesus said “they know not what they do” – also remember that “hurt people- hurt people.” Pray for her and continue to ask the lord to help you to love – because love covers a multitude of sin” . Remember how much our lord went through and he opened not his mouth.
Their is a time to speak and a time to stay quiet! Let that banner of love wave over you for her!”
Gods blessings!
Alice