How to be a Loyal Friend

But standing by the cross of Jesus were his mother and his mother's sister, Mary the wife of Clopas, and Mary Magdalene. 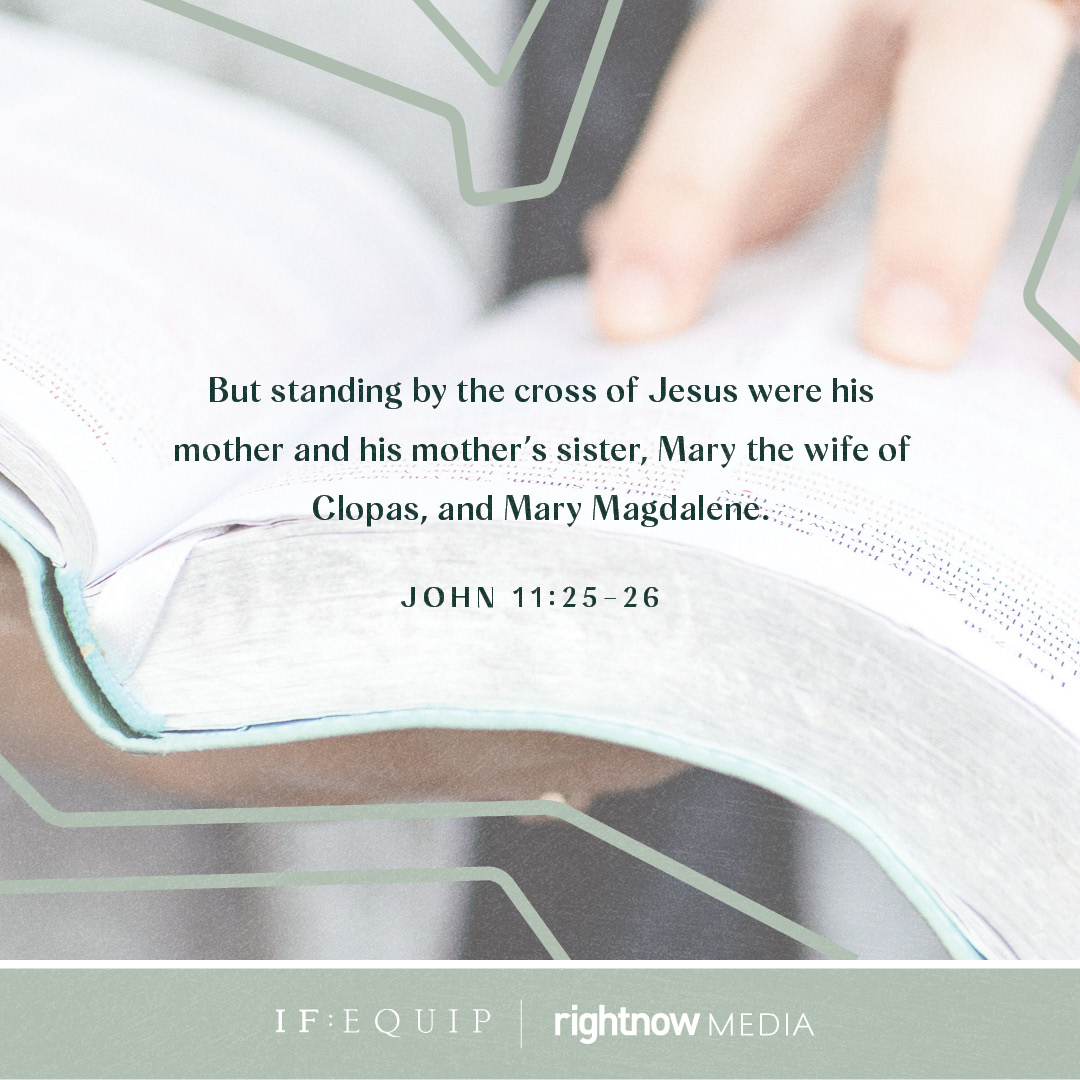 As we read about yesterday, Mary Magdalene was present during Jesus’s ministry, at the foot of the cross, at his burial, and at his resurrection. She was the friend that remained, the one that refused to look away. She is mentioned a total of fourteen times in the New Testament, more than most of the apostles. She is almost always mentioned first, identifying her as an important person and leader in the community. The only list where her name is not first is when she is standing at the foot of the cross with Jesus’s mother.

show up when everyone else runs away

Suffering is hard to bear witness to. No matter how good of a friend you are or think someone else is, when tragedy happens, people run. Think through your own life. In the hardest moments, were you surprised by who was and wasn’t by your side?

In the Gospels, we are told that Jesus was abandoned by the disciples. One betrayed him with a kiss, while the others ran. Peter, the very disciple Jesus would later command to build his church, denied even knowing him (Matthew 26:69–75). Only “the disciple whom he loved” is mentioned as being present at Jesus’s death (John 19:25–27), surrounded by the women who never left. But Magdalene was always nearby, likely with the women who followed behind weeping as Jesus carried the cross to Golgotha, and most definitely standing beside his mother, identifying as one of those closest to him in life (Luke 23:27). She showed up.

From the very first time she is introduced, Magdalene shows up and takes part in Jesus’s ministry. Grateful for her healing, she is transformed in both body and soul. Mary Ann Getty-Sullivan, an associate professor at Saint Vincent College, describes Magdalene as “one of Jesus’s success stories.” Her healing resulted in “faithful ministry as well as social reintegration, leadership, and recognition.”

Magdalene’s presence and the presence of those with her are the reason the Gospel writers had the eyewitness testimony they needed to write the details of what happened that day at the crucifixion. Jesus’s death and resurrection that followed would become our second chance, and Magdalene was there to bear witness to it all.

When has someone shown up for you during tragedy? What are some ways you could be more proactive about simply being present for those you love when they are going through hard times?

When my father was dying I was in the hospital room alone with him as he was taking his last breaths. His doctor came in and asked if he could stay since I was alone. It wasn’t too long till the Dr. went over to him and said a prayer over him and he took his last breath . I was so grateful for the Dr. staying with me.

When you are there you are supporting them. You don’t have to talk, a hug or holding their hand shows you care. Bring their favorite comfort food if you know what it is. That is comforting.

My ex partner walked alongside me when my mother passed away. He listened to my hurt and helped me understand my feelings. He helped me not to make life changing decisions out of the pain that I was feeling. He accompanied me on breaks when I needed them. He remained a consistent and constant person in my life.

My friend Kathy before I met my current husband. When my x would come get the kids she would be there. He would verbally attack me when the kids weren’t around. She stood beside me so there would be a witness. Later my husband did the same and protected me. Later, we all made peace.

My friend Beatrice was there for me when my parents died and she was in another continent but I felt her love….love and distance couldn’t keep her away.
We can become proactive by checking on friends, family and people always even those who seem strong. Always be intentional and pray before you check on people so God can direct and use us. Amen.

My sister was there with me when my husband had his accident in 2016. She has been with me and stood by me so many times and is God’s true daughter and faithful follower. I am learning how to be there more for those around me as I walk on the path God has for me.

I remember not passing my test and my friend Cherone was right there. Her words helped me she said “ you are already a teacher the test doesn’t make you!”
In that moment I felt so much peace!

When I struggled through physical heath issues, my closet at friends and family showed up, prayed for and with me and checked on me often! I try my best to do that same for those I’m close to! When I am aware anyone is suffering I try to send encouragement in the form of prayer, my presence, cards, food or just simply a text or hug to lift him or her up!

Reimage PC Repair Latest Crack for PC is an increase in the life of the system to destroy all the viruses of the system. This software can detect all the malware to increase the performance of your PC. Similarly, by using this software, Don’t need to reinstall the windows to remove all the errors. With the destruction of malware, this software saves your all files and shows them on windows.

I’ve had friends and family who call to check up on me consistently when tragedy occurred . I can be more proactive for those I love by reaching out to them , being in their presence physically/spending quality time , helping them vent about their situation and provide rational solutions.

In 2008, my husband was given a 30% chance of living and spent 36 days in the hospital. Half of those brutal days were spent on life-support in the ICU ~ and every single day and night, as I watched and waited and prayed for a miracle, I was comforted by the presence of family (there’s no one quite like it), particularly my mom who stayed at our home with our three little boys. I also had a childhood friend who drove six hours to spend a week with our boys, playing substitute homeschool-teacher for me (and fun, adopted Aunt:).
We had countless friends, neighbors, and church family deliver meals ~ which honestly, relieved my heart so much for my family, especially in my absence. I am such a detail / calm-control kind of girl, but this was one season I HAD to completely let go, trust the Lord, and lean into the love and support of others.

And we DID get our miracle, by His great mercy. Not only was their a physical miracle for my husband, but we all experienced the miracle of Grace. Especially through the simple acts of kindness and presence, by those who wrapped tight around our family during one of our darkest hours. ♥️