How then do we live? Week Five

Jesus said to her, “Mary.” She turned and said to him in Aramaic, “Rabboni!” (which means Teacher). 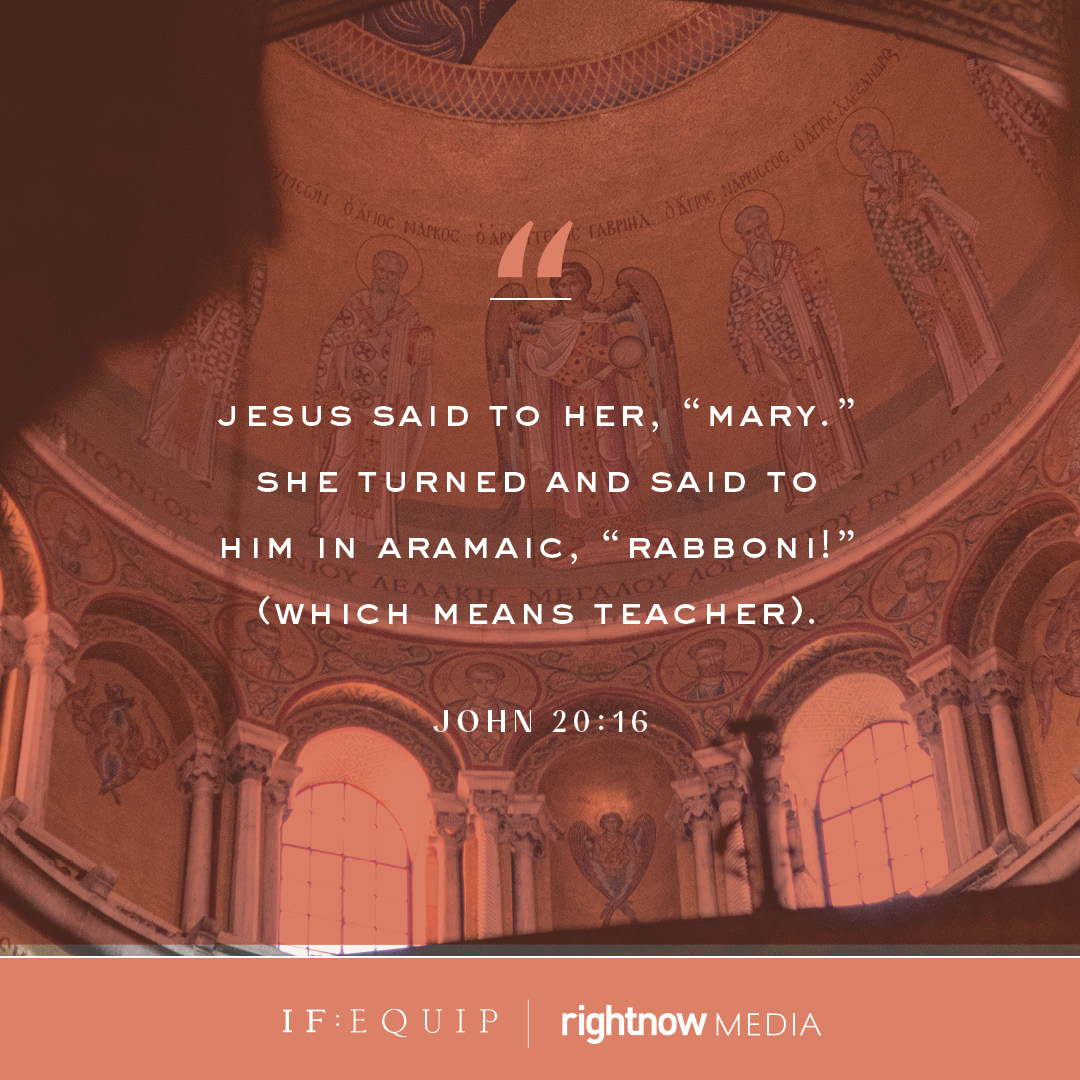 “But which one? Mary, his mother, Mary, Martha’s sister? You’ve got to give me more to go on.”

“Mary, the one from Magdala who had seven demons cast out.”

The disciples may have needed a tagline to identify her, and the church fathers may have confused her with the others, but Jesus knew her. And when he called her “Mary,” she recognized his voice.

Mary returned to Jesus’s burial site in John 20 only to find that his body was not there. She went to the disciples to tell them and they ran to the tomb to see for themselves. They left, but Mary remained. She was grieving Jesus, weeping at his empty tomb, wondering where his body has gone. It was then that Jesus came to her and called her by name.

he called her name

Jesus called Mary by name and she knew his voice and obeyed. This was her friend and rabbi, risen from death. He had done the impossible and she had been chosen, called by name, to tell the others.

apostle to the apostles

Magdalene is described as an apostle to the apostles. She is mentioned fourteen times in the Gospels, more than most of the male apostles. Her story was well known, and as an eyewitness to the resurrected Christ, she was the first to tell the apostles. She delivered the message that they would then take to the world.

Mary Magdalene’s past didn’t define her. Being a follower of Jesus did. He rescued her and if we ever think we’re beyond help, what Mary Magdalene saw in Jesus is a reminder that he is our hope and savior.

Is there something in your life that feels impossible? Why is that? What would happen if you handed it over to God?

The racist incidents, the recent murder of George Floyd by those who are sworn to serve and protect … I am broken-hearted, grieving & lamenting, and the whole mess feels impossible to ever resolve. Jesus, we need You! Bring healing to our land, cleanse us from all vestiges of racism, restore our hearts and minds to see all people the way You see them … made in the image of God, precious and unique. May the fire of Your Holy Spirit this Pentecost, the Holy Spirit that is poured out on all believers, all ethnicities, without partiality, unite us as one church, following in all Your ways … doing justice, loving mercy, and walking humbly with You. In Jesus’ name, I pray.

I have this longing inside of me to follow my passion, but the problem is, I do not know what THAT passion is. It probably sounds unimportant to some, but I find that this feeling of "passion to do something" involves my faith and sharing my love for Jesus. I just don’t know how to do it or what He wants me to do. I fear that the "thinking about my passion to be more involved" will never truly materialize into action.

You speak of what’s on my heart as well. Word for word. I am with you. ?

Nicky, may we both continue to wait for His timing on showing us what His plan for us is. Be blessed. ♥

Oh Angie it will, and the Lord Jesus knows your heart and the right timing. He will provide divine intervention‘s in your life and place people before you that you get to share your love and your faith with. Whether it be a friendly smile, a warm hug or the sharing of the gospel. The Lord Jesus will be faithful to work and guide you with the Holy Spirit. God bless you sweet sojourner and sister in Christ.

Wait. God revealed to me what He had planned for me 17 years ago and it is only now beginning to come to fruition. Many times I felt like I should be doing something, but always felt Him saying, "Wait. You’ll know when. There will be no doubt." He was right. When it is time, your feet will move and doors will open. You are in a time of preparation. Take comfort in knowing your time is coming and He has told you He will use you for great things. It’s just not His time yet. Have peace.

Yes, it seems like there’s always something that seems impossible in each season of my life. I will tend to go days or weeks struggling and crying out to the Lord. Once I lay it down at the cross truly surrender it something powerful happens. There is a certain sense of freedom and peace inside. There is power in staying in the mist of a challenging season, not just running away or trying to find something to numb it. Embracing whatever it is. Allowing the Lord Jesus to move and to grow me. It seems to be a constant struggle but as a sojourn in this life there’s nothing sweeter than that moment of true surrender. Blessings and prayers to all of my fellow sojourners.

Yes and it feels impossible because I did not start it and because it happened to someone else and spills over to me, I feel powerless to heal in the situation, which is a secondary trauma.

Although it feels impossible to me, nothing is impossible for God. God is able to fix these things in a way that I am not. If I handed it to God, this would be a sign of surrender and I will eventually be able to have peace knowing that God is with me and with the person affected too. God cares about the small details of our lives and is in the business of delivering people who are/were bound.

The way am feeling right now… God knows and am praying and fasting about restoration and rebuild. Amen.
Dear God I have been open with you…am only human but that’s no excuse and I need you to change my heart. I need you to give me the strength to make the change. Amen. I know you can do it because as a human I can’t but I know when I am weak then your strength shows through clearly. I need you God. Amen. Our God is the God who makes impossible possible. Amen.

For the past 2 years I’ve been struggling with my mental health. I’ve had to deal with depression, anxiety, an eating disorder, self harm, and suicidal thoughts. It feels so impossible to get rid of and heal from. I feel trapped and suffocated by the things that seem to keep haunting me. It’s really difficult to get past. I’m trying to give it up to God and let him do what he needs to in my life so that I can see the good in this situation. Only He can fix this mess and show me what to do.

All things are possible through God. I have seen it in my life. It might not be how you thought God would answer you, but when He does, it turns out to be the best answer, choice and glory so that you can and want to share with others

I can’t think of anything specific but there are times when my flesh and mind get in the way of what the word and faith tells me to believe! God is truly capable of doing exceeding above all we can think or ask! I feel that my thoughts are sometimes small and limiting based on “sight” and not on what he’s capable of doing!

Yes, the healing of family members and my progression in life as a young adult . Mainly because I am not seeing quick results . I have to learn to be patient with God and trust him more. If I hand it over to God , I will be more at peace with myself and with others .