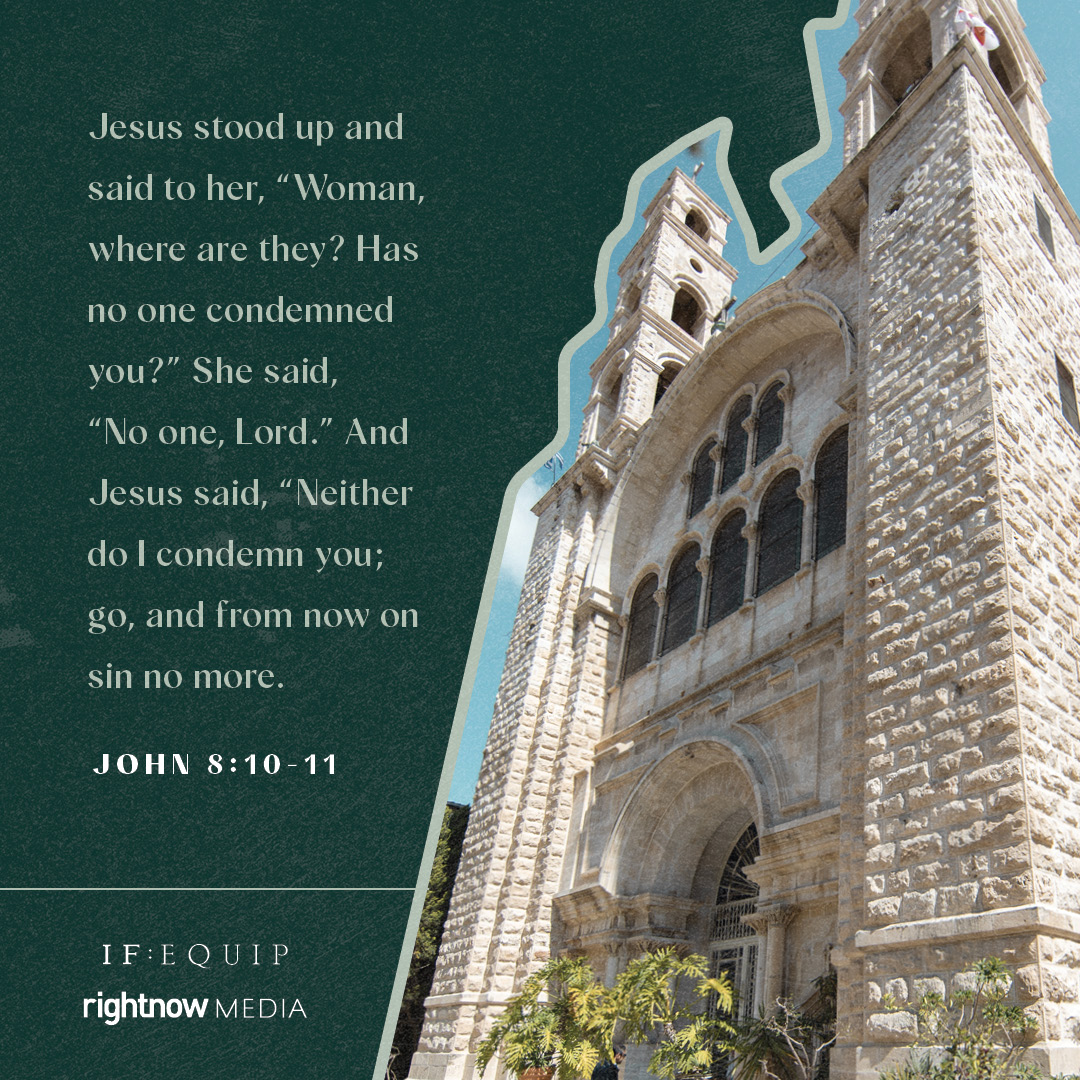 We turn the television off, shaking our heads in disappointment. How many more news stories will we hear that broadcast the suffering of the marginalized at the hands of those in power? Racism, sexism, classism—they are all injustices that God opposes. Not only do we find these stories in our modern news outlets, but the Bible recounts heartbreaking stories that demonstrate the depth and extent of humanity’s brokenness. Like our stories today, the privileged and powerful took advantage of those of lesser socioeconomic status, threatening their very lives. But Jesus cares about those who live on the fringes of society, those whom others turn up their noses at. Today we turn to John 8 and see how Jesus rightly shows the balance between standing up against injustice and extending mercy and compassion.

Unlike the Samaritan woman, this woman had been caught in an act of sin and ostracized because of it.

Picture it. In the early verses of John 8, Jesus was teaching the crowd. He was interrupted by the religious rulers, who had brought a woman with them. What was the reason? They accused her of adultery, having caught her in the very act. And they demanded that Jesus condone her to be stoned to death. What must the crowd have thought? What must that have been like for the woman, to be caught in the act but also to be brought before the public in such a shameful way? Perhaps her friends and family members were in the crowd also.

But John reveals this was a setup, having nothing to do with the woman or condemning sin. The Pharisees wanted to condemn Jesus and bring some charge against him that would finally drive him out of town.

How cruel of these leaders. Instead of responding with a definitive yes or no, Jesus looked at them and demanded that the one who was without sin should be the one to throw a stone at her. He refused to let those in power take advantage of the outcast for their evil purposes. Neither did he allow the marginalized woman to remain in her brokenness. He said to her, “Go your way and sin no more.” What a healing and virtuous moment.

gospel to the marginalized

Repeatedly, the Scriptures show us Jesus’s incredible compassion for the marginalized. He does more than just improve their physical circumstances. He gives them a sense of identity and purpose and shows them, and us, just how valuable everyone is in God’s eyes.

Because many societies still view and treat women in ways that do not honor God, God wants us to stand up against these injustices and show women that they are loved, they are valued, and they are precious in his sight. He will readily forgive sin, no matter how unworthy we feel our sin has made us.

We have the incredible privilege of restoring value to those who live in the margins, including women. Why? We have Jesus and he has equipped us with such good news that will heal and restore hurting people.

Do you know women with pain and shame in their past or even present lives? How can you communicate to them God’s grace and forgiveness? Ask for God’s wisdom and guidance to help you.

One of my closest friends has been through so much in her life. She carries a lot of pain with her every single day. I always do my absolute best to try and make her feel beautiful and worthy, because that’s exactly what she is. I pray that God can help me to say the right things and be as much as a positive influence on her as I can.

I do know women who have a hard time with their past. I used to be one of them. I would say that I try to encourage them that they are important, valued, and have identity. I tell one of them that they are worth everything and that they will not be judged. I let her know that her role here is of value and God loves her for it and has a path for her.

Help them to see themselves as Jesus sees them, not as they see themselves. Nothing is more restorative than the unconditional love of Jesus, poured out on the hurting..

Yes! We must help them to know God
We must be the hands, and feet of Jesus we must
Tell them the good news that it doesn’t matter what you did Jesus will
Forgive
Jesus loves you
Be a light and a hope to them

I know a few women with pain and shame in their past. I have communicated with them that God loves them so much and forgives them despite how unworthy they (we) feel our sin makes them (us)! We all sin and fall short, but his love, grace and mercy continues to cover those that believe in him!

I have friends/ relatives who endure pain or shame . I can communicate them Gods grace and foreguveness by sharing what he has done in my life despite my painful past or guilt that I felt . I can also speak on the stories in the Bible that closely relates to their situation(s).

I know many women like this. I think a good way to start is to listen. To ask others about themselves.

God, Holy Trinity, please extend me wisdom and guidance so that I can communicate with other women on a deeper level. I’ve been burned God, by women I’ve ministered to. I’m hurt still, so hurt. I pray emphatically for healing. I also pray for wisdom because relationships don’t fall apart because of one side. I know I’m not free of responsibility. I want to accountable but I need my hearts eyes opened and enlightened. Please open my mind to fathom my wrong.
Amen

Remind them that Jesus loves them, despite their current situation. I will not be judgemental but continue to show Jesus’ love to them

I would say God does not work according to human standards. He uses all situations according to his will. He uses the most unsuspecting people to carry out His will. And He is good! I would encourage them also to spend quiet time with Him and get to know Him.

Tell them your story! Inspire them to lean towards God! He is there and He wants to help you, He wants to love you!