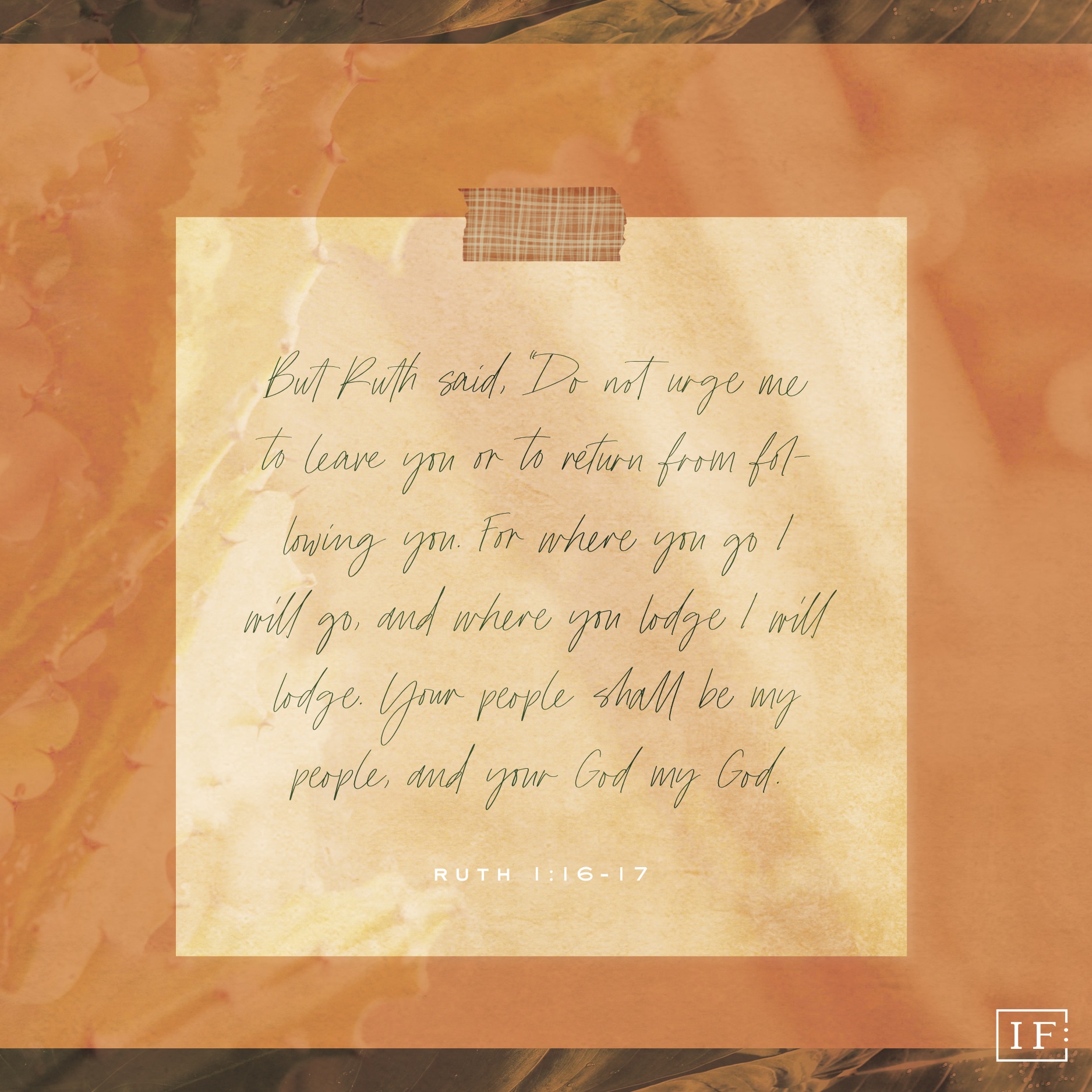 It’s a friendship that nobody but God could see coming. Ruth, a Moabite woman, married Naomi’s son, Mahlon—an Israelite. Then, after living as a resident alien in the country of Moab, Naomi suffered the deaths of her husband and two sons—which also meant the death of her hope for grandchildren, security, a legacy, and rest. When Naomi felt most empty and alone, Ruth stayed. The otherworldly kindness and stubborn will of Ruth play specific roles in this unique friendship.

After her loved ones die, Naomi implores Ruth and her other daughter-in-law, Orpah, to return “each of you to your mother’s house. May the Lord deal kindly with you, as you have dealt with the dead and with me. The Lord grant that you may find rest, each of you in the house of her husband” (Ruth 1:8–9). Orpah turned away after Naomi urged her to depart. On the other hand, Ruth “clings.”

Their friendship was bonded in a mutual love for God. Naomi spoke to Ruth as a fellow God-fearer. Ruth, in turn, could understand and give godly compassion and strength back to her. Our friendships should be built upon the firm foundation of love for the Lord.

The verb used for clung in verse Ruth 1:14 is the Hebrew word dabaq. All over The Old Testament, this word is used to describe being “joined together” or “to hold fast.” Ruth commits to Naomi, despite of challenges or opposition. Even the unknown does not deter Ruth from saying “Where you die, I die, and there I will be buried” (Ruth 1:17). Talk about “Ride or die”!

Naomi imagined the emptiness her future held, a lonely and bleak existence. Ruth was overcome with empathy. She couldn’t bear the thought of watching Naomi walk through the rest of her life alone, facing the difficult challenge of being a widow in harsh times. Ruth was willing to sacrifice the hope of her own future to walk alongside her.

What can we learn from Ruth’s response? What should we do for our friends in the face of great opposition or uncertainty?

When our friends are faced with opposition or challenges, we should empathize with them. We should enter into their grief or sorrow, identify the same feelings within ourselves, and feel with them. Only then will we be able to show the same radical love that Ruth showed Naomi (and the love Jesus shows us).

The word “kindly”— hesed in Hebrew—is sprinkled through the remaining chapters. The word can be understood as “lovingkindness,” “favor,” or “grace.” Ruth gave Naomi a lifetime of lovingkindness. She committed herself to Naomi and, through empathy, walked with Naomi in spite of the unknown.

We too, can love like this. May God let us enter into the stories of others with an open heart and a willingness to give ourselves away.

Friendship in the Bible

What does doing hesed, or lovingkindness, look like in your relationships?

Lovingkindness in my relationships is listening to a friend. Giving my friend a hand, an ear, and my whole heart. Truly being there for them when they need me most even if it isn’t convenient for me. They are there for me as well. They will find the time to answer my calls or texts and give me a real heartfelt response and or just listen to me talk about what is going on. Often times I do not even need advice, I just need to know I am not alone. Ever. This is something I always hope to provide to them: that they know without a doubt, I am always always here and they are never ever alone.

It would look like pushing my pride, thoughts, selfish ways to the side and serve others with an open heart and mind.

Listening to other’s problems or worries or tragedies with empathy and doing kind things for them. A note of encouragement or just making contact with them.

Being there for others when they need you no matter your circumstance. Laying aside your own needs and placing theirs before yours. I find this easy to do with my children and close family, but doing this for friends expressed Jesus’ love more so in my eyes. ❤️

This was so good to read – of really putting myself in the shoes of my loved ones, knowing their heart, knowing what makes them feel loved and safe, and anticipating their needs with or without them asking for it. It’s not out of obligation when this is done best though. It’s a gift and a filling opportunity to show someone you love this kind of love and support.

It’s when I put myself aside and take care of other’s needs. I enjoy showing kindness. Sometimes I just feel in my heart to show kindness to a friend. It really doesn’t have to be a friend; it could be someone on the street. I love being kind to others. My Mother always told me, to treat others as I wish to be treated. That has been with me always. It’s part of life, and if you love God, you must love others.