But Esau ran to meet him and embraced him and fell on his neck and kissed him, and they wept. 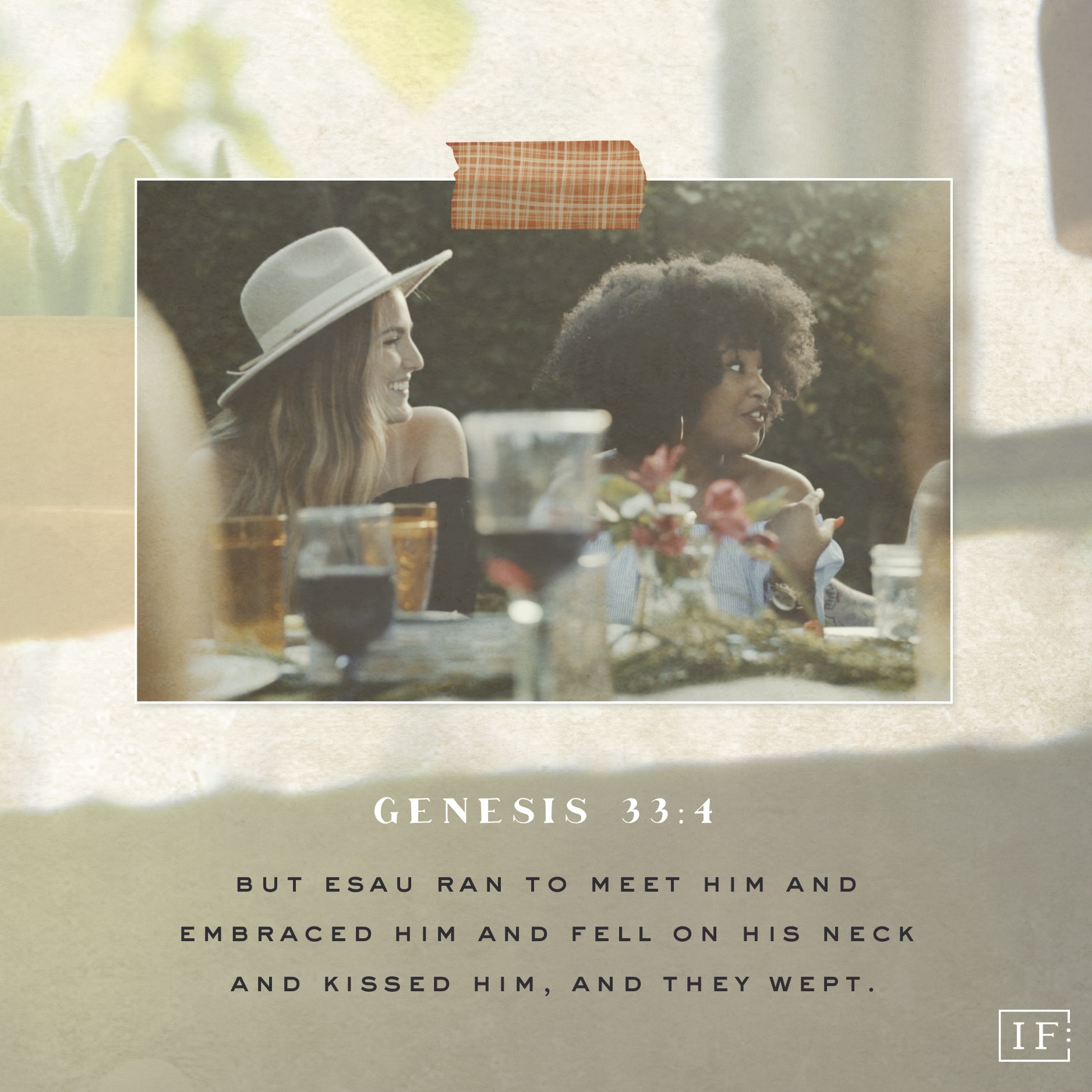 Sometimes Bible narratives read like a soap opera—especially in the Old Testament. There’s murder, intrigue, sex scandals, grand love stories, politics, surprise returns—literally everything is in Bible stories! These stories don’t sugar-coat; they keep it real. Our lives are often filled with the same drama. The story of Jacob and Esau has characteristics that, unfortunately, many of us can relate to.

Jacob and Esau were twin boys whose parents played favorites. Their father, Isaac, preferred Esau because he was “a skillful hunter, a man of the field.” Their mother Rebekah loved Jacob who was “a quiet man, dwelling in tents” (Genesis 25:27). From the beginning, these two brothers competed with each other for the other parent’s affection. With the help of his mom, Jacob tricked his blind father into believing that he was really Esau so he could steal Esau’s blessing as the firstborn son. When Esau found out what happened, he vowed to kill his brother Jacob.

reconciliation is the best option

Most of us never stole our brother’s inheritance, but we may have set out to take revenge on people who have hurt us. Some of us have hurt people, intentionally or unintentionally, who retaliated against us, and we squashed the idea of reconciliation. Like Jacob, there are those of us who have stories of running away because we want to escape to the consequences of our actions and are terrified to face certain people or situations again.

However, as believers, we cannot opt out of reconciliation because Christ reconciled us to himself and gave us the ministry of reconciliation. As Paul says in his second letter to the church at Corinth, “in Christ God was reconciling the world to himself, not counting their trespasses against them, and entrusting to us the message of reconciliation” (2 Corinthians 5:18–21). We cannot count our transgressions against each other, because where would we be if God had done the same to us? God’s mercy spared us and God’s grace forgave us.

In the Esau/Jacob narrative, Esau became the bigger person, and reassured his brother that he was no longer harboring a grudge. Jacob didn’t ever seek Esau to apologize, and spent his paranoid energy dividing his wealth, so that if one caravan was marauded, the other would be safe (Genesis 32:7–8). Perhaps it would have been simpler to also seek the peace, especially because Jacob’s deception cemented the ill will between the brothers.

To seek mutual reconciliation is not only difficult but can be emotionally exhausting. But those of us who are growing in Christlikeness and yielding to the Spirit know that the Spirit produces love, joy, peace, patience, kindness, goodness, faithfulness, gentleness, and self-control. Such traits make mutual reconciliation possible between two hurt, sinful, broken people. So many of us yearn to experience mutual reconciliation like Jacob and Esau, where we can meet and embrace our loved ones, kiss them, and weep from healed grief and the joy of being brought back together.

From the Scripture reading, how had Jacob and Esau both grown in their relationship with one another?

The brothers were competing with one another and the parents played them against each other when they should have been working/living together with a strong bond. Jacob and his mother worked together to take Esau’s life, but in the end Esau was the bigger person and sought reconciliation. He grew because he let go of his past hurt and wanted to create a lifelong bond with his brother and grow and learn from this experience in a positive way. Jacob did not seek his brother out to reconcile or apologize. He spent his time gearing up to protect himself from retaliation. Doesn’t sound like a fun way to live. I guess I need to dig deeper into the reading because I do not understand how Jacob grew.

They competed since birth. And the stolen blessing was the last straw. Esau had every right to be angry. The time apart was needed and when Jacob and Esau came back together, they had both matured and the grace and truth of reconciliation was desired above all else. Often time is what’s needed for reconciliation. Maybe a day or two, sometimes years for enough growth and maturity to fully understand what it means to reconcile.

Family is more important than wealth or power or honor. At the end of the day love always wins.

I wish my family felt that way my children an parents & Siblings believe it’s all about how much money you have an keeping up above the Joneses, I the odd one I’m disabled a can’t afford to live up too their standards and are left out.

Their anger had subsided after being away from each other. They realized their relationship was more important than vengeance, and they forgave each other.