And yet you say, ‘Who touched me?’ 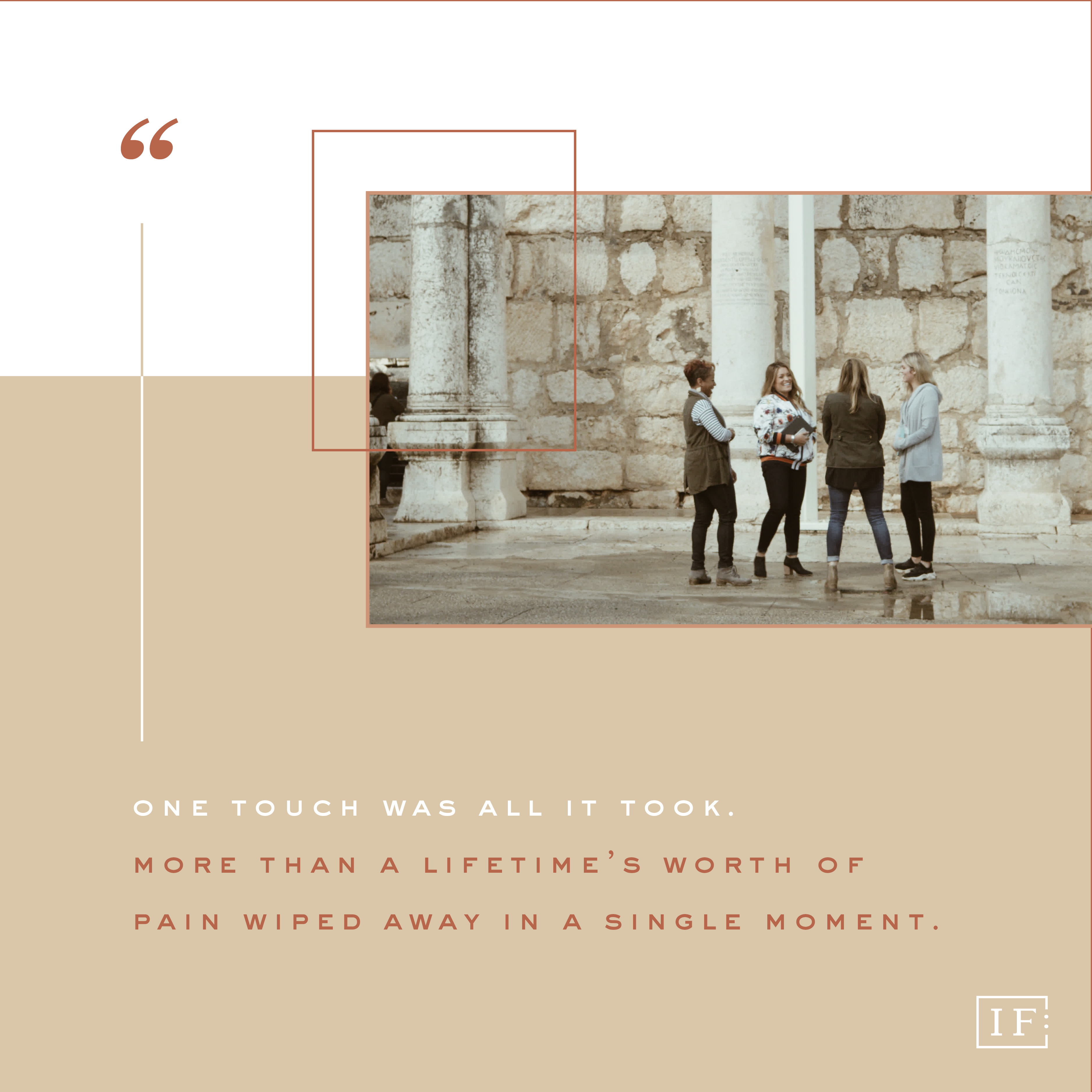 “It seemed to the disciples an unreasonable question. As Jesus had begun moving from town to town, crowds had begun gathering around him, following him everywhere he went. And this day was no different. Moved with compassion by the desperate plea of a father for his dying daughter, Jesus was making his way to save the life of a little girl. His disciples were following behind him as the crowds began pressing in around him, when Jesus turned to them and said, ‘Who touched my garments?’” (Mark 5:30).

Maybe she’d heard how Jesus had restored a man’s withered hand with a single command, or how he’d freed a man held captive by an army of demons just on the other side of the sea. Whatever it was, “she had heard the reports about Jesus” (Mark 5:27) and that had brought this woman to this moment—that, and the brokenness of her life.

Twelve years of menstruation. Twelve years of suffering at physicians’ failed attempts. Penniless and with nothing left to lose, she did the unthinkable. Hiding herself in what must have seemed to her a faceless crowd, she stretched out her hand, reaching maybe just far enough to let her fingers sweep across his outermost garment—the unthinkable and unacceptable.

The unthinkable and unacceptable because women like her, women with issues like hers, had no business being touching distance from anyone. Jewish law made that clear (Leviticus 15:25–27). A woman’s menstruation made her unclean. It marked her and everything she touched. Where she slept. Where she sat. She couldn’t worship at the temple. And whoever touched her would be contaminated by her impurity. So maybe she thought no one would notice her among the crowds, that no one would pull away from her for fear of contamination. Or maybe all she could think about was getting just close enough. “If I touch even his garments,” she said, “I will be made well” (Mark 5:28).

Maybe she didn’t want to bother him. Or maybe she thought he wouldn’t bother with her. Jesus was on the way to save the life of a little girl, a desperate man’s daughter, but the truth, both for this woman and for us, is that Jesus makes room for interruptions, even when they come at the most inconvenient times.

It’s easy to take stock of our lives and mourn for how messy and broken they’ve been—how messy and broken they are. But in the midst of the brokenness of our lives, when we have a tendency to feel most alone and most dejected, we have the assurance of knowing those moments don’t go unnoticed. Jesus turned to this woman, and without a hint of reproof, said, “Daughter, your faith has made you well; go in peace, and be healed of your disease” (Mark 5:34). Jesus takes notice of the broken and messy things. He came to touch and heal the broken. Maybe we haven’t suffered for a dozen years straight, but, then again, maybe we have. Whatever has made up the fragments of our lives, we can know they’re not beyond the reach of God’s loving mercy.

Consider what fears, relationships, or other aspects of your life you ’re not willing to interrupt Jesus with. Why not?

Many times I do not go to God about my health problems and my feelings of inadequacy. I feel like He has so many ore serious health problems to deal with that I shouldn’t bug Him with my own. That is putting God in a box though and saying that He isn’t big enough or powerful enough to help everyone with health problems.

Mine is the fear of my son & family’s salvation & many more. I have prayed for years on this subject since it’s so much conflict in conversations so I never bring it up now. I only know that God does not want anyone going to hell & pray that I will see the day when they truly turn to God & change their lifestyle. I know that Jesus sees my heart & the sadness it brings to me knowing others are not saved. I need to seek Jesus more & pray without ceasing on this issue.

I no longer ask God for personal matters in which I had prayed and prayed about. I sometimes wonder if he hears me. Yes I know that there is nothing to hard for God.
After years of the same pray, without an answer I have concerns

For me I think that I often fall into the trap of thinking that b/c God knows what goes on in my life and my heart that I don’t have to talk to him about every detail. The truth is though, that conversation builds relationships—both human and heavenly.

Relationships with others, especially those I feel awkward around. Why? Because God will reveal my shortcomings and begin to change me. Which is not a bad thing but can be a difficult thing. I tend to struggle with not feeling good enough and often can put myself down. It is something I have to daily work on with God.

Right now, in my walk and my relationship with Jesus, I feel I can interrupt Jesus at any time. Jesus takes the time for those who want to talk to him and be near to him. It’s that great love that Jesus has for me that I can call on him at any time.

It’s the smaller requests I tend to keep to myself. Sometimes if I think something is more of a want or pleasure item/action, I’ll hold off on asking for it to happen because it isn’t significant enough.

I can relate to this woman wanting to touch Jesus and believing by doing so her life will be changed .
It seems so much easier to reach out to Jesus when we’re in a crowd and we think that we’re not identified and don’t have to bear our needs met this crowd that Jesus will automatically know and fulfill our void . So much harder to take one on one time with the Lord seeking his face in his favor it’s so much more personal but so necessary

I do not think there is lack of willingness as much as not trusting him that petition is worthy of his time and attention. Sort of like doubting Thomas
See him , try him before feeling sure he is who he says he is, he wants to assure me He conquer all I need to do is connect with him

I’m afraid for my kids all the time. For each of them I have unique things that I worry about and loose so much sleep and energy one. One particular is hard for me to even pray about because it would be accepting My sons fate if a miracle doesn’t happen. Then I have a similar need for my husband that I also worry about but for him I don’t really have a fear but it makes me more frustrated and a little angry at myself. I think of the woman who stretched out her hand. That’s all she did and such a healing happened. Can I have that same faith honesty and belief??