Courage From the Margins

For by grace you have been saved through faith. And this is not your own doing; it is the gift of God. 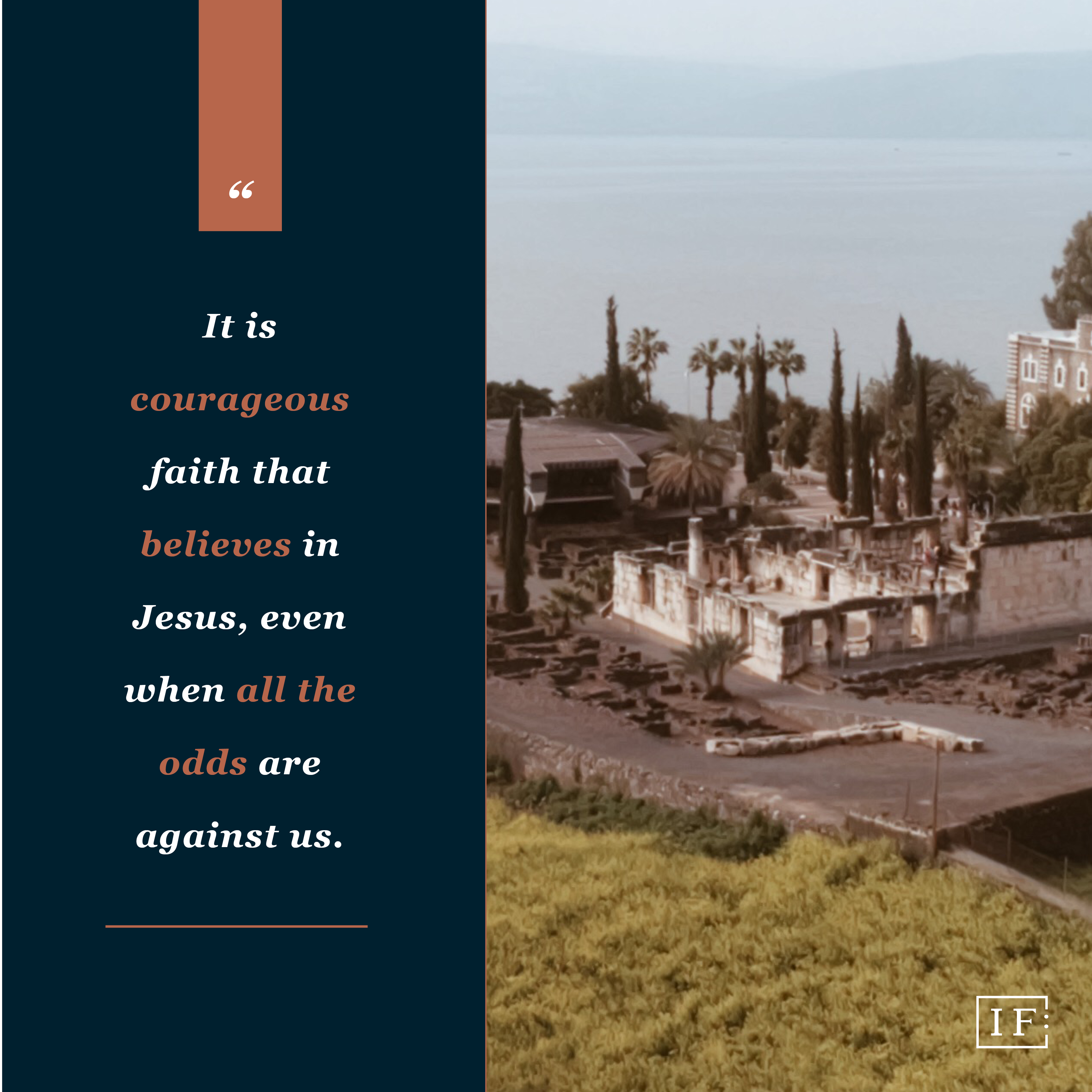 courage from the margins

She was a Syrian. That’s all the spectators could see: a Syrian—a Gentile, Syrophoenician by birth—and a woman. That meant she wasn’t supposed to be there. She didn’t belong. She didn’t fit, and everyone knew it. But what they couldn’t see—not on her skin or the features of her face, not in her style of clothing, not even in her gender—was what, in that moment, mattered most. She was a mother and her little girl was suffering. So, even though she knew she’d receive condemnation, she entered the stranger’s home looking for the one she knew had the power to help her.

This woman’s story is not an easy one to read. She falls before Jesus and begs him to “cast the demon out of her daughter,” and just when we would expect Jesus to do what Jesus does—to heal without hesitation—he doesn’t. Instead, he looks to her and says, “Let the children be fed first, for it is not right to take the children’s bread and throw it to the dogs.” What? If we didn’t read it with our own eyes, we wouldn’t believe it. This woman is desperate. Her child is hurting, and Jesus can do something about it. But instead, he meets her distress by challenging her faith. It sounds cold to us. It sounds unfeeling. And for a lot of us, it sounds like a closed door, but Jesus had a greater purpose in mind for this woman.

The Syrophoenician woman’s faith was anything but timid. If Jesus’s words stung her we wouldn’t know it, because she answered him saying, “Yes, Lord; yet even the dogs under the table eat the children’s crumbs.” She met Jesus’s boldness with boldness of her own and, in a single response, she displayed both unwavering determination and vulnerable humility. She knew she couldn’t demand anything of Jesus. She knew she was at his mercy. She knew all the social norms and hierarchies. But she also seemed to know something else that couldn’t be seen. So she didn’t let his words deter her, because she believed—and her faith became action.

Her faith believed Jesus could liberate her little girl from the unclean spirit, but her courage didn’t let anything stand in her way. This is the kind of courageous faith we’re called to live out—in our jobs, in our homes, in our conference rooms, in our classrooms. And here’s the amazing thing: when we live out our faith with courage, Jesus doesn’t disappoint us. Just as Jesus approved of this woman’s boldness, he approves of ours because ultimately, it is courageous faith that is most honorable to Jesus. It is courageous faith that believes in Jesus, even when all the odds are against us.

These are questions that are very difficult to answer. I can imagine situations in which I might face, with some degree of boldness, an authority of some type. If I believe I have a just cause or that I am right, I would proceed with courage. However, if I hadn’t submitted my proposed action to the Lord and trusted in His answer, my faith would not be strong. In those cases – and I have experienced a few – I, no doubt, didn’t want the Lord to tell me "no," so I foolishly proceeded in my own strength, to reap results that were less than satisfactory. I have learned some hard lessons in cases such as those.

I think sometimes we just move along with life without thinking we are brave or have a great deal of faith. We simply do the next thing. Then we look back and think how brave or adventurous we were–and where did we get that faith??? When we give our days to God, He begins to automatically take over…and we are surprised when we look back. That’s where we get the stories we tell about the goodness and faithfulness of God

Reconnecting with scott….closeness to Adam & family

Yes I have had courage and little faith in my marriage. My marriage dissolved.
I’ve had faith and little courage but once I set my mind of that prayer my courage built. My daughter was healed from a heart condition and that built my faith.

I recently called on courage to deal with a construction issue regarding my home: Although I was anxious, I summoned my courage to discuss the issue with our insurance agent and to meet with the adjuster. Because of the circumstances involved, my faith that we will have a positive outcome is weak. I am chagrined about that fact and am trying to fortify my faith by calling on the Lord, the only course and the best course of action, I truly believe from examples in Scripture, to increase my faith!

I hate going to the doctor. I get nervous a couple of weeks before I have to go. I am getting better about this. God has helped me by seeking out doctors that are wholistic and much more preventive. This helps me be much more positive about the doctor visit and is building my faith in God.

I have faith but little courage when I’m around non-believers. I use my actions to set an example but not enough courage to speak up, which is so bad on my part. If I’m at lunch or dinner with friends or family & they never say a prayer before the meal, I bow my head & say a silent prayer. They may look at me strange but that’s OK.

I think my career, and making changes to do something I find challenging and rewarding as a next step is where I struggle to have courage that goes along with my faith. I can pray about it, but I also have to put out the resumes, and do the searching.
With all that is happening in America currently, I have courage to acknowledge my ignorance and blindness, and work to change things in my own life, but it’s hard to see a country-wide solution without Jesus intervention. I need to work on praying more, and leaning on my faith to let God handle the rest.

I’m not sure how to answer the question but I think of the phrase courageous face and it makes me think that I need to have faith enough that when I pray and ask for some thing I give it all to God without hesitation of how he might answer my prayers. sometimes as I’m praying I can’t fully be open and what I’m asking because deep down I’m afraid of how or what it might take for my prayers to be answered. But this reminds me I have to be bold and what I ask and I have to have faith to know that God will do what it takes and I need to release the thought of me having control of the situation and remember God does and not me

I think for me it’s a really believing what I pray for and that God will take care of all of my needs. I think I have the courage to keep pushing on and getting up but don’t always have faith that it’s going to work out the way I think it should, Which is where I lack the faith that God is my source, he takes care of me, his plan is the best plan and I have to have the faith to believe that!