What is the Old Testament? 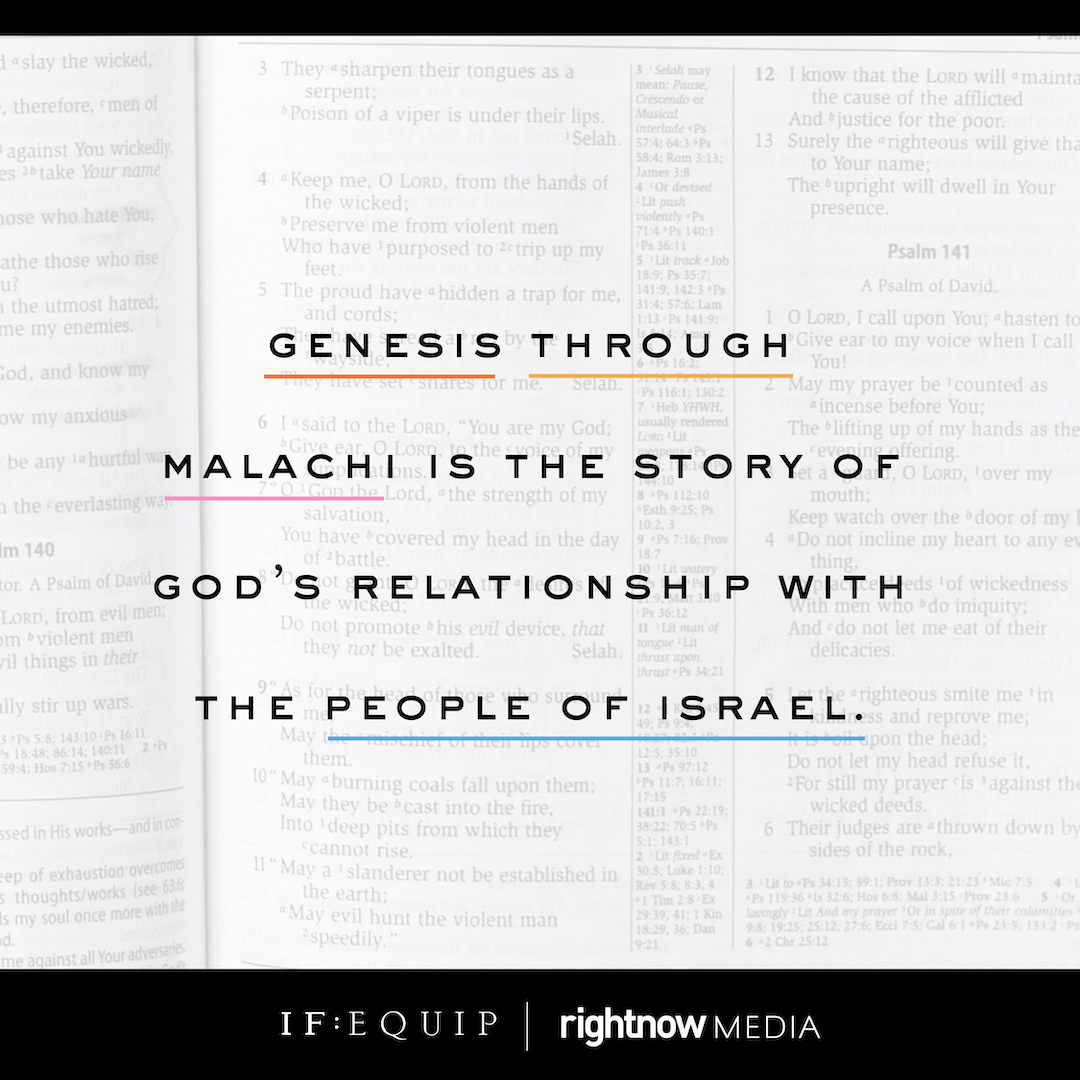 Beginning with Genesis, the Old Testament is comprised of thirty-nine books written in Aramaic and Hebrew over the span of approximately 1,000 years. While God declares in his Word that he is sovereign over all of humanity (Isaiah 45:22–24), Genesis through Malachi is the story of his relationship with the people of Israel.

The Old Testament is a cautionary tale. But it is a cautionary tale filled with hope. It is a record of God’s covenant relationship with a particular people through whom he would reveal himself to all of humankind. It is story of humanity’s struggle to choose faithfulness to God. Our desperate need for a redeemer is woven through every covenant, every sacrifice, every generation. It is an epic story, and in weeks two, three, and four, we’re going to do a deeper dive into the books of the Old Testament. Before we get there, let’s look at a big picture overview of the first thirty-nine books of the Bible:

(Genesis 3) Humanity rejected God. Adam and Eve questioned God’s love for them; they questioned his goodness. God gave them everything they would need for a full life in fellowship with him, but they believed the lie of the enemy when he suggested God was a cosmic killjoy. Stained by sin, humanity could no longer have fellowship with God.

God made a covenant, or an unbreakable promise, with Abraham to bless him, give him land, and make him into a great nation (Genesis 12:1-3). Abraham’s line continued through Isaac and Jacob, and God declared he would be their God and they would be his people” (Genesis 17:7). Through Jacob’s son, Joseph, God’s people were saved from famine by moving to Egypt.

Eventually, a Pharaoh came to power that did not know Joseph (Exodus 1:8), and the Israelites endured four hundred years of slavery in Egypt. But “the people of Israel groaned because of their slavery and cried out for help. Their cry for rescue from slavery came up to God. And God heard their groaning, and God remembered his covenant with Abraham, with Isaac, and with Jacob. God saw the people of Israel—and God knew” (Exodus 2:23–25).

God never forgot his promises. Israel arrived in Egypt as the twelve sons of Jacob, but they set out for God’s promised land, led by Moses, with more than a million strong. After they wandered the desert due to their own disobedience, God led them into the promised land through Joshua. God delivered the people of the land over to them, and they ruled there for many generations. Again, God promised he would be their God, and they would be his people. He told them if they kept his ways, he would bless them with peace and abundance. But if they abandoned his ways, he would give them over to their enemies (Leviticus 26).

Because Israel turned away from the one true God and turned to false gods and foreign kings for provision and protection, he gave them over to their enemies and they lived in exile for seventy years. Then, just as they endured four hundred years of slavery in Egypt before entering the land promised to Abraham, God’s people now waited through four hundred years of silence before Isaiah 11:1–5 would be fulfilled.

We live in an age when the concept and consequences of sin are dismissed as an outdated guilt trip. And according to today’s culture-makers, God—if he exists at all—is distant and unaware of the daily details and decisions of our lives.

But the siren call of the Old Testament is Remember! Remember who God reveals himself to be. Remember his faithfulness even in the face of our sin, rebellion, stubbornness, and doubt. Remember that God is mighty to save. He is “. . . a God ready to forgive, gracious and merciful, slow to anger and abounding in steadfast love, and [who] did not forsake them” (Nehemiah 9:17). If we are to have a real appreciation for how far we have fallen in our sin and how powerless we are to rescue ourselves, we must remember the lessons of Old Testament Israel. You will be surprised at how much of yourself you see in their journey!

But the siren call of the Old Testament is Remember! Remember who God reveals himself to be. Remember his faithfulness even in the face of our sin, rebellion, stubbornness, and doubt. Remember that God is mighty to save. He is “. . . a God ready to forgive, gracious and merciful, slow to anger and abounding in steadfast love, and [who] did not forsake them” (Nehemiah 9:17).

Even though Jesus is the centerpiece of Christianity, why is the Old Testament essential to a full understanding of God’s plan for salvation?

I believe the Old Testament shows how God feels about us, He gives us so many chances to get it right. It shows his forgiveness, His hope, His grace and His mercy. He shows us that he wants what is best for us.

It shows us throughout the time of Israel and Ester and lots more that God is with us and he cares about us.

I do not know this answer. I have a terrible problem retaining information.

To understand where it all begin is essential.

It gives us the context around God’s love for His people and the world. It explains the Beginning story and how we came to be, how/why Jesus Christ was delivered and sent for us and communicates His love, faithfulness and grace to us in SO many ways. Through SO many situations when we don’t deserve Him or His love, it reminds us who HE is and we can understand that he IS steadfast and will ALWAYS be with us.

It’s essential to understand God’s holiness and what is required of us to commune with a Holy God. We are able to see that we cannot achieve holiness and redemption with our Savior.

The Old Testament is the background story for the main event, Jesus. No matter how many times or what we do we are God’s children and He is there to pick us up. His salvation is not what we ask for, but it is always enough to sustain us.

Basically, the OLD TESTAMENTS provides an in-depth explanation on WHY GOD’S WORLD was full of SIN/EVIL & how it started; You see, everywhere we go/observe in life, we r around millions of people who tend to do the following~ lie, swear/curse (under GOD & JESUS’ name), spread rumors, the list goes on & on;
Anyways, reading the OLD TESTAMENTS not only helps us to understand what really happened in GOD’S UNIVERSE, but who was involved in sinful situations;

Well, think about it~ if we didn’t have JESUS in our lives, 2 begin w/, we wouldn’t be created in the 1ST place!!! When GOD developed the OLD TESTAMENTS, HE wanted 2 tell us how people seek HIS WORLD~ good/evil;
In GENESIS 3, we see how the 1ST man & woman created, Adam & Eve, sinned by eating the forbidden fruit from the TREE o/ KNOWLEDGE!!! Even in 2day’s society, we are tempted each & every day, but GOD wants us 2 turn the other way in which HE would lead us in2 a new path full o/ PEACE, ❤️, FAITH, TRUTH, etc!!!

I believe the Old Testament is essential because it shows us how it all started. And that no matter what no matter how bad, God is a God of forgiveness and grace. The Old Testament has helped me a lot lately with the state of our world, this is history repeating itself.