Can we be fixed?

Now we know that whatever the law says it speaks to those who are under the law, so that every mouth may be stopped, and the whole world may be held accountable to God. 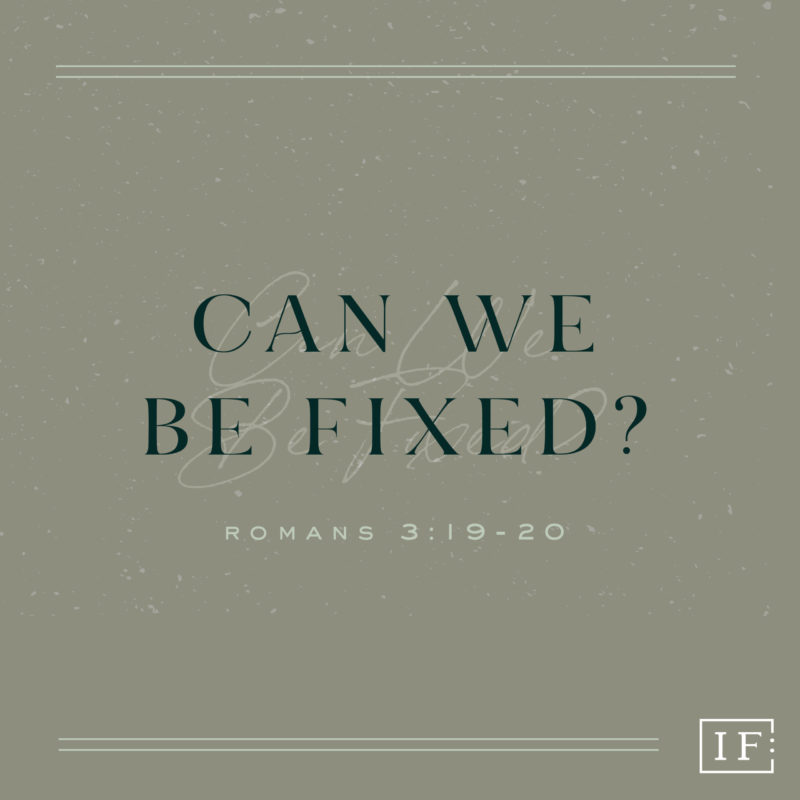 One of the cutest things little kids do is place Band-Aids on their bumps and bruises. Seeing a kid carefully pick between Frozen, Dora, or smiley emoji Band-Aids to put on their knees they bruised with absolutely zero blood and no chance of the skin breaking makes us smile. But we happily oblige because it makes lil’ Jasmine feel better. When Jasmine asks to put it on her stuffed bear, we put up no fight either. We know that the Band-Aids will have zero effect in helping her heal a bloodless bump, and even less so for her teddy. But, when Jasmine grows up and is in her mid-thirties asking for a Band-Aid for her bruised knee, you can expect many perplexed faces and probably some side eye. In the same way a Band-Aid is unable to heal a bruise, the law is unable to heal our brokenness. They might make us feel better, but they lack the power to save.

The law—the statutes given by God to govern his people—served a beautiful and good purpose. It revealed God’s character, his values, and his standard for just and right living. It also provided regulations and boundaries for God’s people. We celebrate God’s gift of the law, while also recognizing the limitations of it. Though the law helped humans to know the righteous standard, it was powerless toremove the stain of unrighteousness when sins were committed.

It told us how to live but did not empower us to do so. The law, though good and beautiful, only revealed our sin, it did not have the ability to atone for it.

So, while we celebrate that the law is both regulatory (helps regulate our behavior) and revelatory (reveals God character), we must look elsewhere for a savior for our sin problem.

you can't work for it

In God’s gospel, the fact that the law was powerless to save us is in fact good news. If the law could save us, the gospel message would always be: Do better, strive harder, sin less. Instead, we have a more holistic gospel that says something greater than the law came to make a way for us to cease striving, to stop working, to trust that God will free us from sin. In a world of more, bigger, better, louder, we need a gospel message that says be still, rest, trust, and receive. The beautiful law could not save us and thank God for that. Instead, the gospel message is much more beautiful and causes far less striving.

In what ways have you tried to earn God’s favor? Does the idea of “cease striving” comfort you? Why or why not?

Constantly attempting to earn God’s favor, while I will never gain perfection, my intentions make me better, nicer, kinder, gentler – which are positive steps. Cease striving is comforting to recognize He will still love me and accept me for who I am. As stated, striving makes my behaviors more Christ-like.

I try to do what is in the scriptures.yes. I am weak at times and grateful for God’s grace .If Jesus bgg ad not died for me ,I would not be able to go to God the way I do.

I am thankful my salvation is not dependent on what I can do. That knowing I will always fall short on my own, but I to know no action I take, no amount of good deeds will make me righteous, only He can make me righteous. This doesn’t give me carte blanche to run amok in sin, but frees me to know that when I sin (because I will) that His grace saves me.

I try to bargain with God as well. Cease striving does comfort me. I am far, far from perfect and I think this is an endless journey.

I learned at an early age that you don’t have to earn Gods forgiveness, it is a gift that we can freely accept. I look at how I need to strive for obedience, not forgiveness. Thank goodness God loves unconditionally because I fail MANY times at obedience.

Even though I very well know my good works can’t get me to heaven I still have that little voice in my mind that tells me to do just that – keep doing good. But I also know that God asks me to "do good" for Him not for me. Being helpful and doing good for others without a striving component in those acts is comforting, freeing and rewarding here on earth and in heaven.

I’m not sure that I can "cease striving" because my understanding of the Gospel message is to try, that’s right, try to live like Jesus. There is no way that I will ever match His Righteousness, so I would say that I as long as I am in my human body, I will not stop striving to live like Jesus. I will try to follow the law, even though that’s like putting a band-aid on a bruise. And I will gratefully accept the mercy and grace of God through the forgiveness in the Blood of Christ.

I try to love my neighbors but know I fall short. For me cease striving means I can and should trust God that others will help because God is bigger than all of this. I have comfort in my faith that God will touch the hearts and lives of others to care about those who are hurting (and there are many).

Hard to let go of the “should be doing” list we make up in our minds – thinking it will make us acceptable to God – when we’ve been freed to simply respond to God’s love.

I remember as a child I was told to offer up to God the things you particularly didn’t like or want to to, so I was doing good things for God not me. To this day I have continued to do that and I’m some way I feel I am praising Him.