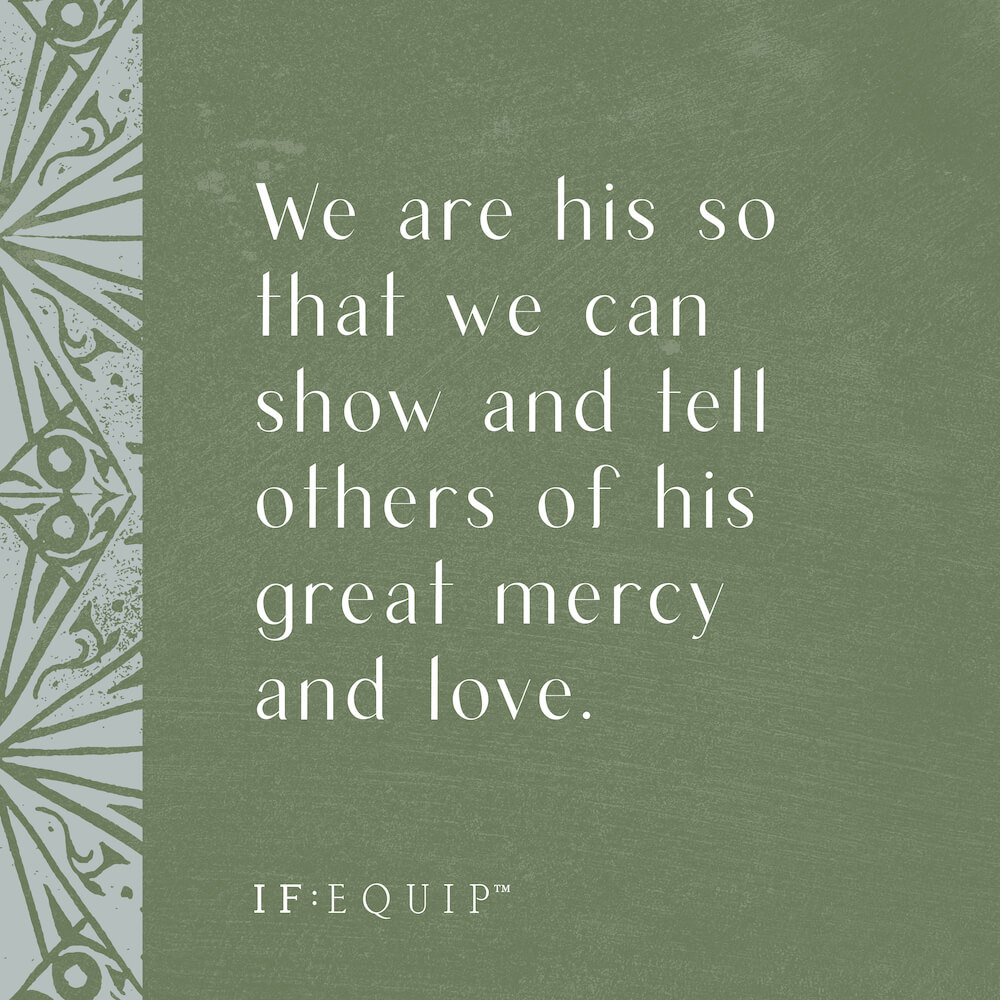 From the beginning, the Mosaic covenant was set up with brokenness woven through it. A broken leader and a fearful people were holding one part of the covenant, while a faithful and merciful God was holding the other. They needed God to save them out of physical slavery as well as the slavery of their sin. Even though they were physically freed, they lived in spiritual bondage, quickly turning against God’s laws and ways.

As fast and furious as their inner rebellion was, God was quick to move with mercy. Moses cried out to God saying, “If now I have found favor in your sight, O Lord, please let the Lord go in the midst of us, for it is a stiff-necked people, and pardon our iniquity and our sin, and take us for your inheritance” (Exodus 34:9).

We also have broken beginnings. We inherited this from our first mother and father, Eve and Adam (Genesis 3). And yet in his mercy, God does not leave us broken. Not only does he forgive us, he also restores us, as his own people and his inheritance. He takes us as his own.

We belong to God on a whole different level. We are not only forgiven, but we are also taken as God’s joyful possession. We get to be his. We get to be his children. He doesn’t forgive us then put us back out by ourselves. He forgives and says, Come in and be mine. I Peter 2:9–10 says, “But you are a chosen race, a royal priesthood, a holy nation, a people for his own possession, that you may proclaim the excellencies of him who called you out of darkness into his marvelous light. Once you were not a people, but now you are God’s people; once you had not received mercy, but now you have received mercy.”

We are his so that we can show and tell others of his great mercy and love. His forgiveness is never dependent on our fulfillment of law or perfection. His forgiveness calls us in to be his own.

When We Mess Up

What are the broken places God is inviting you to receive mercy? How does knowing you are God’s own give you security and confidence?

This is very timely today. More broken places than I wish, at this stage. How could He still value me? What have I done with my life? But to let this truth sink in, that He called me to be His own and I am His even now, goes to those deep broken places and pours healing oil into them.

God wants me to receive mercy from my broken places due to childhood sexual abuse. I am working hard to trust God and accept that I am His own and that He only wants good things for me.

Thank you for being so vulnerable! keep working towards his plan for your journey it is so beautiful on the other side of healing 🙂

Oh boy! I never thought I was a broken person until recently when I discovered my brokeness in my marriage. He has poured out his mercy on my marriage and my family and kept us together, working to get closer to him.

I have invited God into my deep deep dark past in the begging of this year 2021 and WOW he has delivered me and was/is with me every step of the way! I am still in the process but I definitely needed his grace, mercy and forgiveness. He also uncovered and delivered me from past sexual trauma that I wasn’t aware was there because I had buried it deep inside of me.
I am so proud OF MYSELF for trusting in him on this journey of healing form generational bondage. I have no doubt God is for me and not against me.

I have been fearful about sharing the Gospel and Jesus with the people in my life who do not know Him. I have put my fear for my reputation above sharing Jesus’ good news, and it’s been difficult carrying this kind of weight. Knowing that I am God’s own gives me security and confidence because I realize that this is my exact purpose in life. To deny that would be denying my reason for living. It is still fearful sometimes because you never know how someone is going to react or how it might impact your relationship, but I can turn to God to rely on His strength and mercy, rather than my own.

I am asking God to have mercy on me as I am very quick to judge by one’s appearance. I surely am not above anyone. Yet, I judge people in my mind as if I am, especially if they are different than me. Lord, help me to stop. I need to remind myself that God loves them as much as he loves me, as I should as well.

Mercy, grace, and forgiveness
This is what I receive as gifts of God
He forgives me of my sins, my anger, my impatience, my immaturity, my greed in my marriage to my husband and friendships with my women friends
My ignorance, my laziness, my complacency when it comes to studying God’s word. Lord Jesus I ask for motivation and ambition to study your word
Psalm 46:10 “ Be still and know that I am God”

God is calling me to receive mercy in my lack of patience with my children, my irritability surrounding my relationship with my mother and need to excel and strive. Knowing I am a child of God is incredible. I know that he loves me unconditionally and with complete truth and understanding of where I am at. He will never leave me nor forsake me. No matter what decision or choices I make. He’s constantly calling me back to him!