God Restores What is Lost 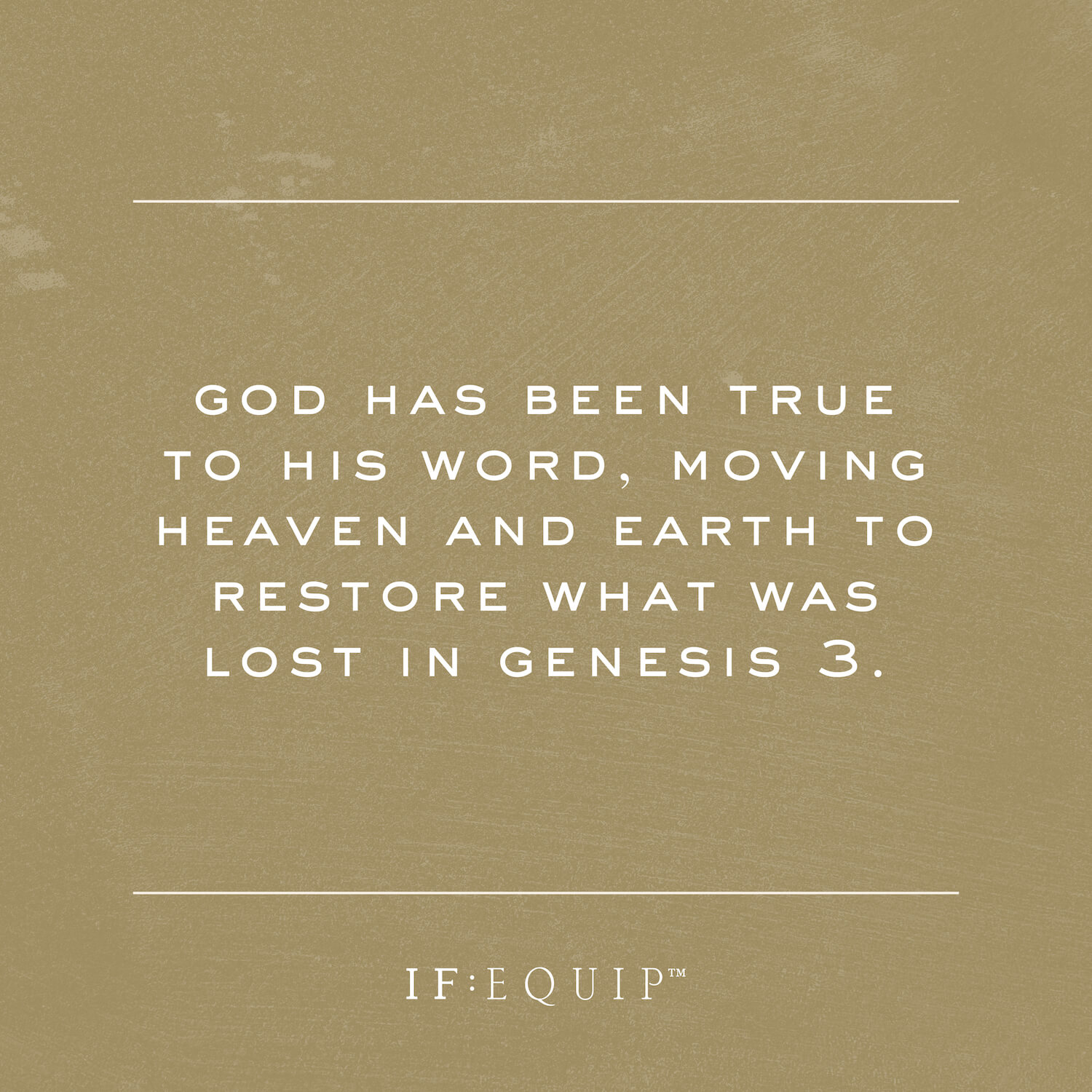 We experience it a hundred different ways: It’s the call from the doctor telling us the tests are back, and it doesn’t look good. It’s the string of long nights spent at the office only to be passed over for the promotion. It’s the hurricane that wipes out half a city in an afternoon, and the political unrest that doesn’t seem to care who gets caught in the crossfire. It’s the marriage counseling that didn’t work; the guy who said he’d call but doesn’t; the pregnancy test that comes back negative; the child who’s losing her way—and we can’t do anything to stop it.

No one has to tell us. No one has to convince us. Something’s “off” in this world, and we know it. We feel it.

Between natural disasters, socio-political disruption, and personal disappointments, our lives hardly resemble the world of Genesis 1 and 2. And not without reason. While the first two chapters of the book of Genesis give us a glimpse of an idyllic paradise, only one chapter later paradise is lost.

Deceived by a snake and led by her own faulty thinking about God’s explicit command, Eve takes fruit from the tree of the knowledge of good and evil, eats it, and gives some to her husband (Genesis 3:1–6). A moment later, the open, perfect fellowship of Genesis 2, what made it possible for the man and his wife to stand before each other naked without a trace of shame, vanishes, and for the first time Adam and Eve use God’s creation to hide themselves, both from each other and from God (Genesis 3:7–8). Only four verses later, an already strained relationship is pushed to the limit as the man turns against God and his wife (v. 12). Before all is said and done, all of creation—the woman, the man, the earth—will suffer the effects of Adam and Eve’s sin (vv. 14–19). As Genesis 3 comes to an end, God drivesAdam and Eve out of the garden to make their life east of Eden.

It’s all too familiar, what we see in Genesis 3. And if all we were left with was a picture of a man and his wife broken by sin, it would be almost unbearable. But the thing about God is that he’s merciful. And so, in the midst of shame and hiding, blame and accusation, the pain of childbirth and the cursing of the ground, God made a promise, not to the man and not to the woman, but to the snake. God says, “Because you have done this . . . I will put enmity between you and the woman, and between your offspring and her offspring; he shall bruise your head, and you shall bruise his heel” (vv. 14–15). Wrapped in that promise we find the foreshadowing of the gospel—the good news that God would send someone who would set right what Adam and Eve’s sin had broken.

And God has been true to his word, moving heaven and earth to restore what was lost in Genesis 3. It is toward this movement of redemption that we now move.

Is there a part of your life that feels broken beyond repair? God is moving heaven and earth to restore what has been broken in your life. What do you need to entrust to him?

I am so thankful for the grace and mercy of God, that because of Jesus, I can humble myself before Him. It is no longer having to be good enough. Jesus is enough.

My physical health after covid infection . It’s been a year . I’m back to work but each month I have unexplained infections & fatigue 🙁

Mostly unsaved loved ones. My teenage son professes to be a Christian but doesn’t live like it. I see no evidence of his genuine repentance or salvation. I know he believes in God but he doesn’t appear to have a real relationship with Him. I pray daily for his salvation & for other family members I truly believe are lost.

I completely understand. My 15 year old daughter is a professing believer who doesn’t walk out that life style. Her friends are not likeminded which scares me. Only 5 people out of 40 in my family are Christ followers. I place it all in God’s hands. He is in control and He desires that goodness that was described yesterday. Please Lord God let that be our prayer. That our family members would turn to you for salvation and redemption in your son Jesus Christ’s name. Amen.

My son, a beautiful little boy who suffered sexual abuse is now a grown man with a personality disorder. Several suicide attempts and anger towards those who love him so much. Our family is in pain and broken, but we trust and we pray and we love him.

Thank you so much

The part of my life that feels broken at times is my mind trying to tell me God does not really have it all under control (doubt). However, I stand on God’s promise; it is a fact that God is Sovereign no matter how I feel. This causes a constant back and forth struggle for my mind. Now it’s time to take out a piece of armor, the Word, active and sharper than a two-edged sword. I find a scripture that supports God’s promise and repeat it repeatedly until Peace sets in. I find this is God moving heaven and earth to restore my faith. I must trust Him in all my ways and lean not to my own understanding.

My sweet son was sexually abused as a child and now has a personality disorder as an adult. Several suicide attempts, many hurtful words.. all stemming from this disorder he developed. It does seem beyond repair.. But I will choose to trust Him.

Hi Frances,
I am so sorry to hear about your son. I was sexually abused at the ages of 7-8 by a neighbor. I blocked it out for many years and acted out sexually and with drugs and alcohol, before becoming a born again Christian when I was 32. I often thought about suicide because I was just not happy and didn’t know why. I had the memory of the abuse come back to me at the age of 42 while in a Theophostic Christian counseling session. I was involved in a Christian support group called Celebrate Recovery at the time, and through that program, I was able to find a lot of healing from the abuse. I still have bad days, but now function a lot better and am more hopeful. I will be praying for your son as I know firsthand the damage that sexual abuse does to a person. Keep praying and don’t give up on God. He can do the impossible. He loves you and your son and will see you both through.

I am forever grateful for God’s redeeming love. It is but for the grace of God go I.

I am in a single season right now, and it feels like I will never be able to find a man that is what I truly want. I feel stuck in a loop, thinking that with every relationship I’ll have to settle for less. I find myself wanting a relationship, yet I don’t even know what my standards are and I don’t want to fall into the trap of another bad relationship or miss out on something that is actually good for me. I need to trust God with my fears and look to Him for my standards of a good, healthy relationship. I need to set my relationship with Him as my first priority and trust that I am not missing out or running out of time.

Relationships. In-laws, friends, husband. The common factor is me. I can’t help but look at me and wonder what I’ve done to cause the feeling of brokenness in these relationships. They aren’t ‘broken’, they are badly bruised. They are in dire need of repair and I just don’t know where or how to start. I need to trust and let go and sometimes I just don’t know what that looks like.