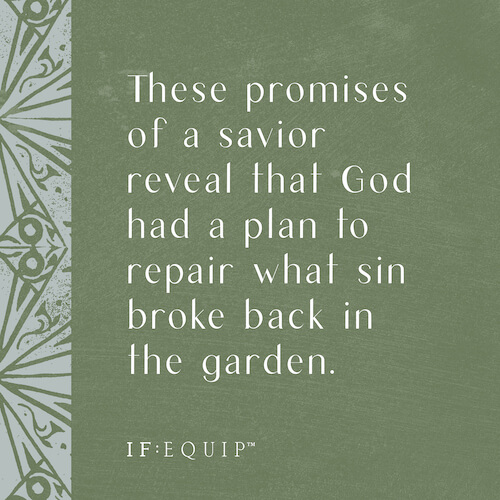 When Adam and Eve listened to the deceitful serpent and took their fateful bites of the forbidden fruit, God made a promise: one day, the offspring of man would crush the serpent’s head and triumph over sin and death. Years later, God made a promise to a man named Abraham, establishing him as the father of a multitude of nations through whom the entire world would be blessed. God made a promise to David, giving him a kingdom and the pledge that his throne will be established eternally.

All throughout Scripture, a savior was promised and foretold. Humanity would not be left crushed under the weight of sin and condemned under the judgment of law. Instead, a rescuer would come who would redeem God’s people. Isaiah declared that he would be our wonderful counselor, giving wisdom beyond our finite human abilities. He would be called mighty God and everlasting Father, titles that recognize his divinity, authority, and protective care. And Isaiah declared that this promised Son would be the Prince of peace, bringing reconciliation where there has been conflict and division, and there would be no end to his peace.

Other Scripture authors revealed that this chosen one (the Messiah) would establish a New Covenant between God and his people. Not only would he be the one to sit on David’s throne to rule eternally, but he would usher in a day when God would remove our hearts of stone and give us hearts of flesh, hearts willing to submit to him in love and obedience. The prophet Hosea described this New Covenant as a marriage between God and his people, where his people are married to God “in righteousness and in justice, in steadfast love and in mercy . . . [and] in faithfulness” (Hosea 2:19–20). Best of all, in this new covenant, we will “know the LORD” (Hosea 2:20, emphasis mine).

These promises of a savior reveal that God had a plan to repair what sin broke back in the garden and that what he offers humanity is so much more than just a get-out-of-hell free card. He offers peace, justice, faithfulness, mercy, righteousness, and steadfast love. And he wants us to know him.

These are the things that our stony hearts, marred by sin, desperately long for and our broken world desperately needs. Not a day goes by where our headline news is absent of stories of injustice, conflict, violence, war, oppression, outrage, and hatred. We are messed up people, the blind leading the blind, destined to fall into pits of our own despair.

But we don’t have to stay there. A rescuer has been promised.

Which title of the promised one discussed in today’s study resonates with you most?

The title "Everlasting Father" resonates the most with me because I am reminded of how loving God is. A father protects his children and loves them beyond measure. God does this for us and then some. He is the most perfect example of love and He lavishes it on us. He loves us with an everlasting love and He protects us. We are His, and nothing we could ever do would change that.

Wonderful counselor resonates most for me in the season that I am in right now. With the world going crazy all around us, I have felt that underlying sense of anxiety and depression…grieving for things of the past, wishing that certain circumstances in my life were different. It’s comforting to know that we have a wonderful counselor who will provide a listening ear and a steady voice of truth in all the crazy.

"Everlasting Father". It reminds me that God is with me always, caring for me like a kind, patient father. He is a dad who wants a relationship with His children and longs to protect them and hold them close.

Mighty God, I serve the God almighty that has everything under control. This mighty God that at the same time loves me to the point of sending His son to dye for me.

We are married to Him.

Buy Google Voice Account – GETPVAACCOUNT Looking to <a href="https://getpvaaccount.com/buy-google-voice-accounts/">Buy google voice accounts</a> or Numbers Then you are in a very suitable place We have 100 genuine, manually created, and phone verified Google Voice