Contribute to the needs of the saints and seek to show hospitality. 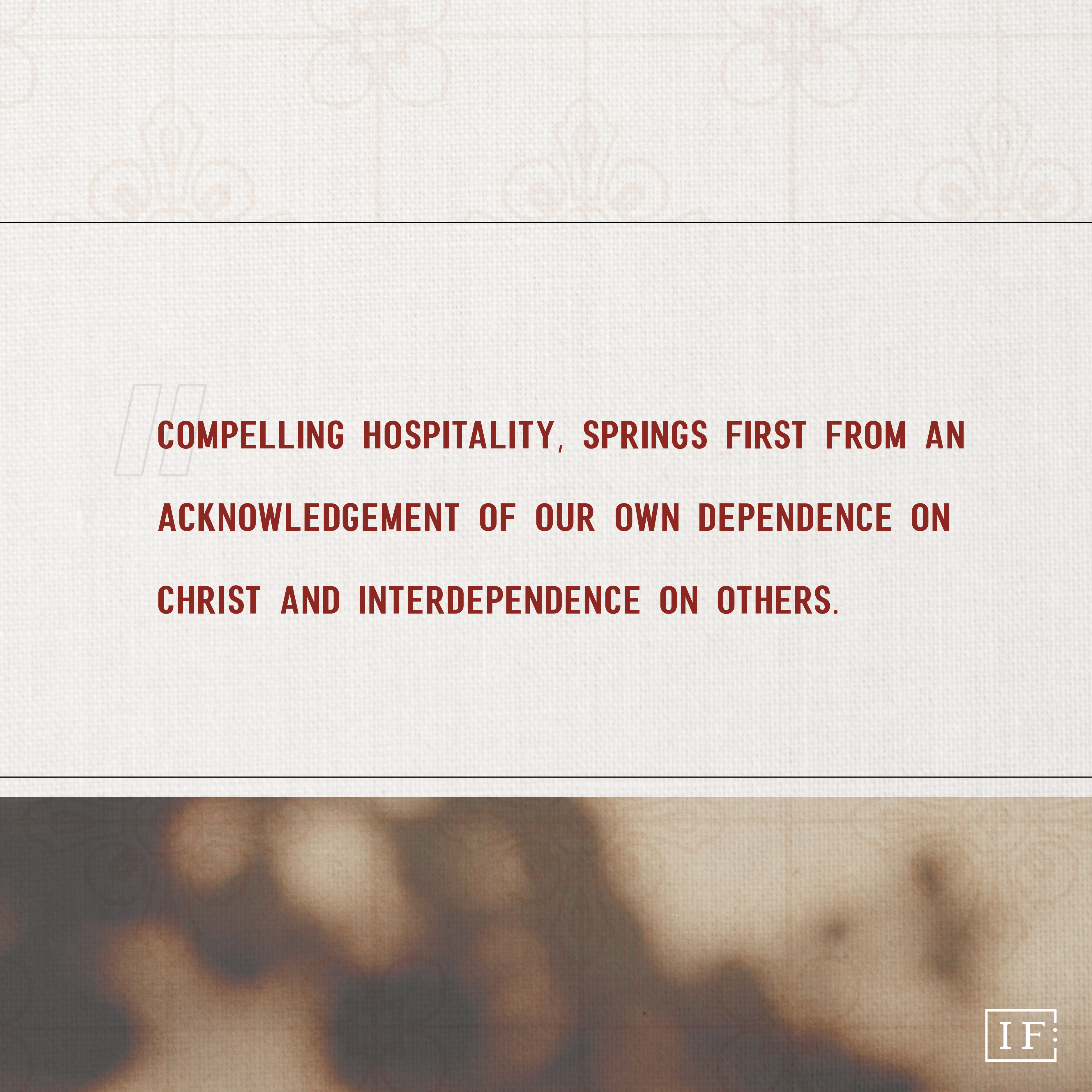 Grandmas who wag their fingers and insist we take home the leftover pie; grandpas who quietly tuck money into our pockets; sisters who pack us a sandwich for a long trip back home; friends who stock their guest baths with our favorite toiletries so we can breeze through airport security lines on our way for a visit . . . these are people who firmly—and generously—extend hospitality so compellingly that we cannot say no. Their actions wrap us in belonging as swiftly as mothers scoop up their children. Love compels their generosity.

Acts 16:13–15 introduces us to Lydia—a woman the text qualifies in three ways:

When Paul and his missionary brothers arrived in Philippi—“a leading city of the district of Macedonia and a Roman colony” (v.12)—they went to the river beyond the city gates and found a group of women who had gathered for the Jewish Sabbath, or Shabbat. God had primed Lydia’s heart for this moment. Her belief in God turned to trust in Christ and resulted in her immediate baptism and the baptism of everyone living with her.

Irresistible hospitality followed: “After she was baptized, along with everyone in her household, she said in a surge of hospitality, ‘If you’re confident that I’m in this with you and believe in the Master truly, come home with me and be my guests.’ We hesitated, but she wouldn’t take no for an answer” (v. 15 MSG). Lydia’s conversion compelled her to offer generous hospitality. Paul’s acceptance affirmed her faith and place within the family of God.

Sandwiched between Lydia’s conversion and that of the jailer is an exorcism, a false trial, an imprisonment, and an earthquake (vv. 16–24). The events that landed the pair in prison warrant study on their own. For the sake of observing hospitality in this section of Scripture, however, we pick up the story again toward the end of chapter 16 (vv. 25–34). Imagine traveling in a foreign country when someone apprehends you, drags you into court, falsely accuses you, and then beats you before throwing you into a dark jail without trial. When we hear of similar circumstances throughout the world today, don’t we feel powerless and outraged? Paul and Silas, though in the middle of such a situation, responded by singing and praying even though they were shackled and bleeding. If at any time “gnashing of teeth” would be understandable, it would be here. Yet God not only empowered them to react supernaturally, he also rattled open the prison doors and broke the leg irons right off Paul and Silas (and all the inmates) through an earthquake. The sleeping jailer jolted awake, assumed the inmates had fled, and drew his sword to commit suicide. But Paul shouted, “Do not harm yourself, for we are all here” (v. 28). As the jailer’s eyes adjusted to the light and he saw every prisoner sitting in their places, he rushed to Paul and Silas, astonished, and fell before them, begging to know how to be saved. After hearing the gospel and accepting it as truth, the jailer “took them the same hour of the night and washed their wounds; and he was baptized at once, he and all his family. Then he brought them up into his house and set food before them. And he rejoiced along with his entire household that he had believed in God” (vv. 33–34). As with Lydia, the good news kindled such a joy in the jailer that it sparked an outpouring of welcome and belonging. Paul’s acceptance again affirmed the jailer’s faith and place in God’s family.

Acts 16 is a wild ride. From the gentle beginning at a riverside Shabbat to the quaking earth at the end that cracked open a hardened heart, God’s message of grace sparks the same chain reaction:
first, repentance and acceptance of Christ as savior;
second, joy that compels hospitality.
third, affirmation of the convert’s belonging in the body of Christ.

Both Lydia and the jailer became founding members of the Philippian church—a body of believers that brought Paul joy long after he departed the city (see Philippians 1:1–8). Compelling hospitality, then, springs first from an acknowledgement of our own dependence on Christ and interdependence on others. Such awareness makes our offers of invitation, provision, and belonging ones that others will eagerly accept

Every person who lived with Lydia as well as the jailer trusted Christ as their Savior. What do you think made that possible? In what ways do you offer hospitality so attractive that others cannot help but be intrigued about the God you serve?

Compelling hospitality, then, springs first from an acknowledgement of our own dependence on Christ and interdependence on others. Such awareness makes our offers of invitation, provision, and belonging ones that others will eagerly accept

Just loved this passage above..it all hedges on our accetance of Christ andhow we live it out.. and its how we choose the ways we can offer our hospitality..

If we allow the love of Christ to truly abide in us and work through us; others will be attracted, at that point we can show hospitality.

God had prepared their hearts and they were looking for what God would be doing in the world around them and so when he moved, they recognized and received it instead of rejection and refusal in reliance of their own understanding and way. I think when we are moved so profoundly we cannot help but love fiercely and create space with others to rejoice in our Lord

The people Lydia met, who all were Christ followers, probably became believers through someone else sharing Jesus message of salvation with them. They probably had recognized their dependence on God to provide for them as they were in some of the roughest places in their lives where life was out of their control.

Ways I offer hospitality that seem attractive and intrigues others to want to serve God is through my children. They see their obedience, respect, kindness and some have patience and gentleness with one another. This is a reflection of our parenting.