But he was pierced for our transgressions; he was crushed for our iniquities; upon him was the chastisement that brought us peace, and with his wounds we are healed. 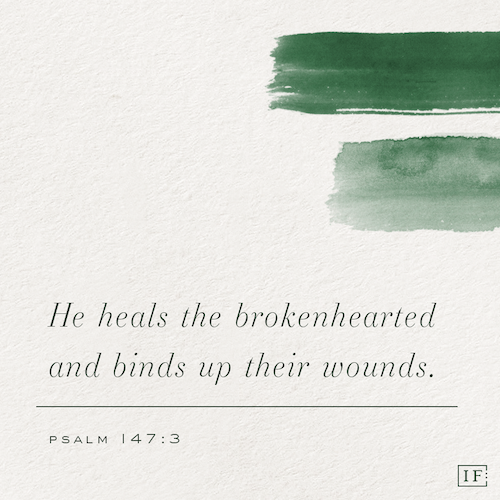 comfort to the brokenhearted

Though the Israelites were unfaithful in keeping the laws of the Lord, God did not turn His back on His chosen people. After giving themselves over to their sin, the Israelites were sent into exile. They were sent into captivity because of their disobedience and because they were worshipping false gods (Deuteronomy 28:36). Realizing that the Lord gave them over to their desires, the Israelites became brokenhearted over their sin. It was their sin that brought them into exile. They had lost their land and political power, but they never lost the promises that the Lord had made to them.

The Messiah was coming! The Lord sent prophets to proclaim His promises. Hope was present even in broken circumstances. In God’s timing and by His grace, He brought His people out of exile and allowed for Jerusalem to be rebuilt. That restoration proves that God is gracious to provide healing for those who are brokenhearted. He does not leave us in exile but brings us back into restored relationship with Him. There is always a call to restoration; a call to repent and come back to Him.

Christ set an example of how to pursue righteous living in all that He did. As He faced intense suffering, He patiently submitted to the will of God. Jesus could have stopped His enemies with a single breath, but instead He endured the pain set before Him. His pain was intense, but Christ remained obedient to the Father (Philippians 2:8). Healing has been accomplished only because of the wounds He bore. It took wounding the Messiah to heal our spiritual wounds. Christ’s suffering accomplished the healing work of salvation.

We have the privilege of looking to the cross and knowing that all sins and all wounds have been healed. Ironically, what caused the most excruciating pain to our Savior provides a source of comfort to us as believers. His greatest suffering provides our greatest healing. If you are experiencing suffering, be challenged to contemplate the suffering the Messiah endured on your behalf. Know that our present suffering cannot compare to the future glory we will receive (Romans 8:18–37). Our earthly suffering is put in its proper position when viewed in light of what was accomplished for eternity. Those who believe in God have the opportunity to trade in grief for the inner peace and spiritual healing that He provides. Fixing your eyes on the cross produces a gratitude for the One who bore our pain to heal our broken hearts.

What suffering are you currently facing that has taken your focus away from the Cross and caused you to dwell on your own circumstances? How can you refocus on the fact that His wounds have healed you?

Missing family Covid situation Some health issues getting older and feeling alone at times
Hard to live alone.. working much and being too tired..

Getting into Gods word more. Trusting Him more and more in All and always
HE is my LORD AND SAVIOR ?