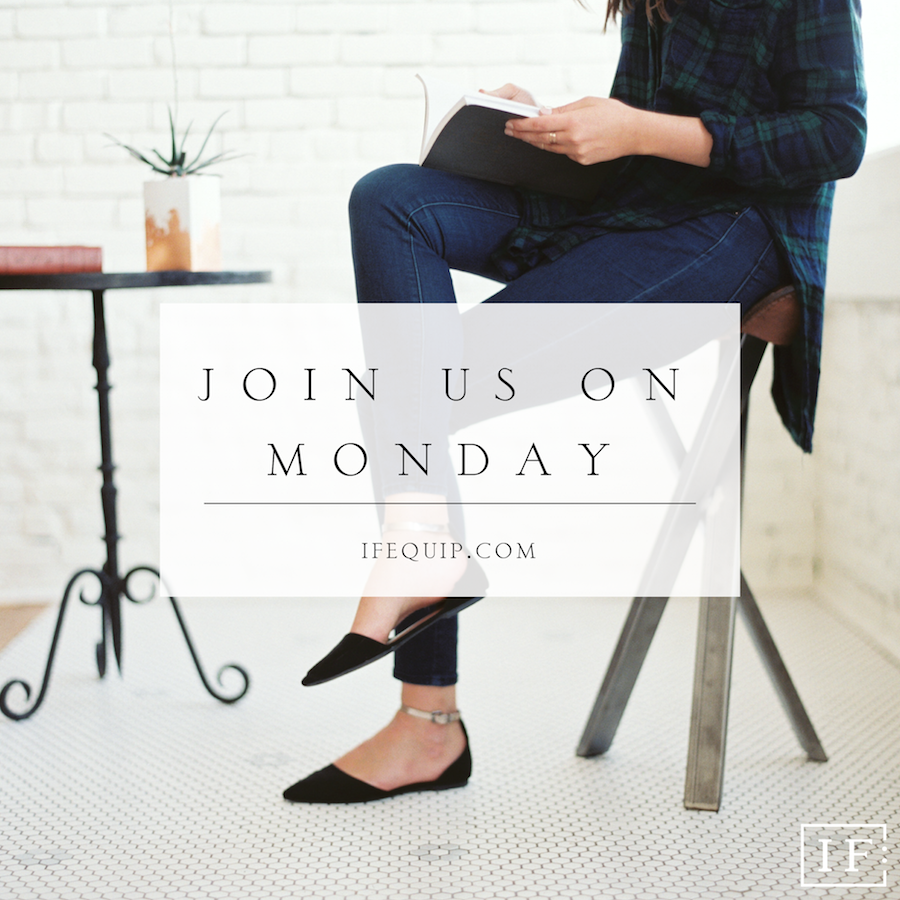 In just a matter of days, we’re diving into the Nicene Creed–one of the foundational documents in church history. But before we do, we want to stop and ask a few questions to orient us to what it is exactly we’re going to be studying.

The word “Credo” (where we get the word ‘creed’ from) simply means “I believe.” It’s a statement of faith–a confession of what we believe. While scripture is authoritative, it’s also pretty long and in-depth and so a creed gives us simple statements based on scripture to help us remember the fundamental truths of the faith.

When you go to a website for a church or ministry, you’ll often find a section that says, ‘About Us’ or ‘What we Believe.’ This is where the organization gives a bullet-point version of the essential truths which they regard, based on what they believe the whole of the scriptures say.

In the same way, the Nicene Creed is a set of confessions and statements that explain in a few paragraphs the main ‘Big ideas’ of the church. So when we say we’re studying a creed, we’re really digging into the scripture behind it.

In the early church, there were a lot of conflicting views about who Jesus was. He had ascended into heaven and so He wasn’t there in the flesh to explain and so scripture–the Word of God–had to be understood in a whole new way.

Some people thought that Jesus was just a good rabbi, and others thought He was fully God, but not fully man. Still others argued that maybe He was fully man but not actually divine. All of this dissension and misunderstanding was pulling the church apart. In an effort to foster unity amongst believers and keep people from false teaching, a few creeds were written. Perhaps you’ve heard of the Apostle’s Creed or the Nicene Creed. These were documents that were discussed, agreed upon and intentionally written for the sake of getting everyone on the same page.

So in that way, Creeds are a great measuring stick. We can have some clear boundaries in our language about God and we can say things with confidence. Now, hundreds of generations later, churches stand on these statements, reminding us that when we speak well and rightly of God, it stands the test of time. 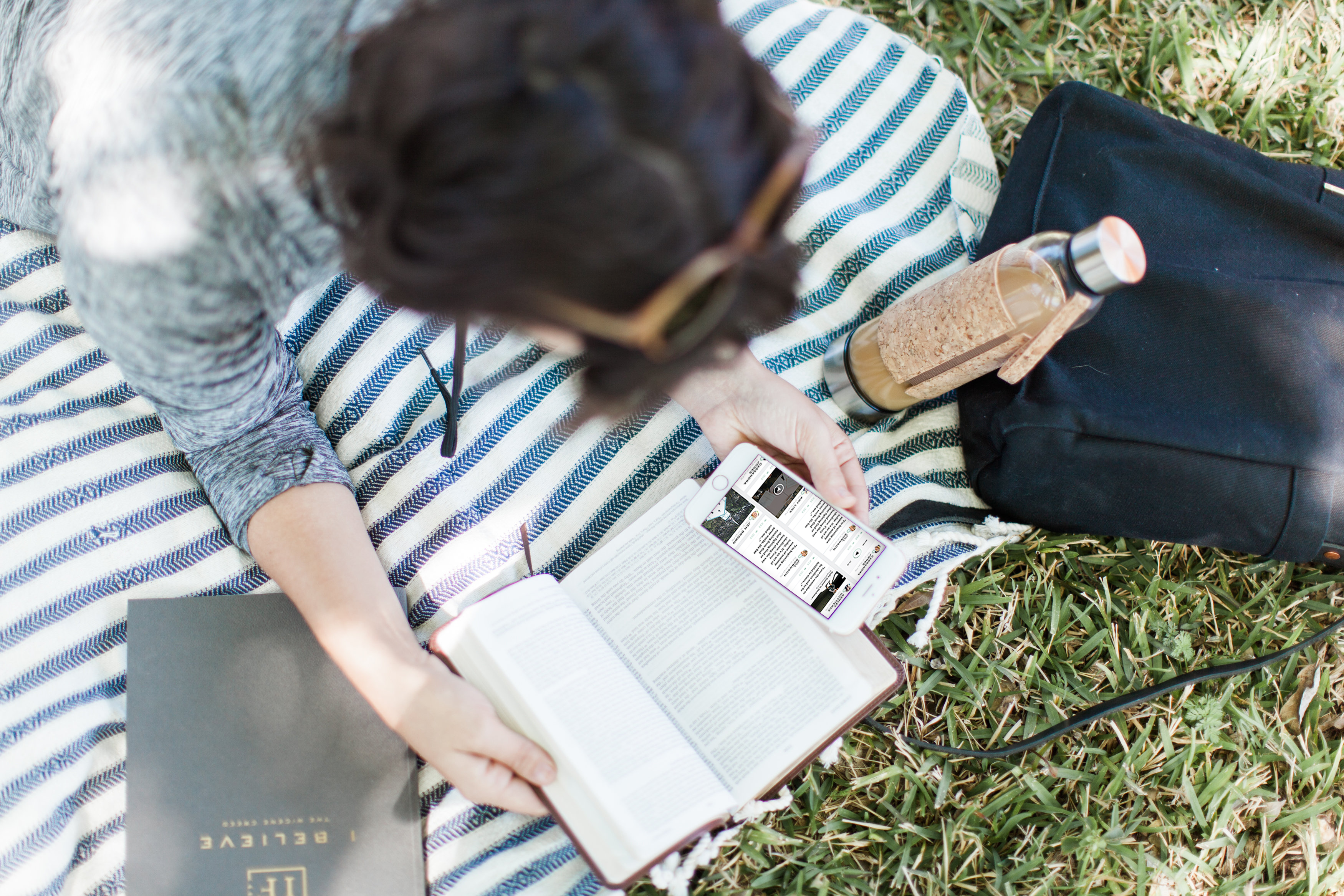 Creeds don’t replace the Bible as the authority on what God says, but they mirror what we read in the Old and New Testament. As we get ready to take on each of these statements, one by one, we can be thankful for those who have gone before us. Even over 1,600 years ago, the early church gave us an incredible gift in the writing of these creeds and reciting and reflecting on them gives us a beautiful tradition of confessing what we believe and why it matters.

Before we begin on Monday, we wanted to give you a chance to get familiar with the words of the creed itself. It is full of rich language and beautiful truths of who our God is. Below, you’ll find it in its entirety. Give it a read:

“We believe in one God, the Father, the Almighty, maker of heaven and earth, of all that is, seen and unseen. We believe in one Lord, Jesus Christ, the only Son of God, eternally begotten of the Father, God from God, Light from Light, true God from true God, begotten, not made, of one Being with the Father. Through him all things were made. For us and for our salvation he came down from heaven: by the power of the Holy Spirit he became incarnate from the Virgin Mary, and was made man. For our sake he was crucified under Pontius Pilate; he suffered death and was buried. On the third day he rose again in accordance with the Scriptures; he ascended into heaven and is seated at the right hand of the Father. He will come again in glory to judge the living and the dead, and his kingdom will have no end. We believe in the Holy Spirit, the Lord, the giver of life, who proceeds from the Father and the Son. With the Father and the Son he is worshiped and glorified. He has spoken through the Prophets. We believe in one holy catholic and apostolic Church. We acknowledge one baptism for the forgiveness of sins. We look for the resurrection of the dead, and the life of the world to come. Amen”

These words have been passed down for over 1,600 years. Millions of Christians have recited this creed all over the globe and across generations. Even the use of the phrase “We Believe” indicates that we stand for this in our local places, but we also represent the unity of the church around the world. It’s been spoken at weddings and funerals, in rural communities and urban neighborhoods and the underground & persecuted church. And now, we get to collectively come together and continue the beautiful tradition of standing on these promises and saying together, “We Believe.”

We can’t wait to dive in with you, friends! See you Monday! 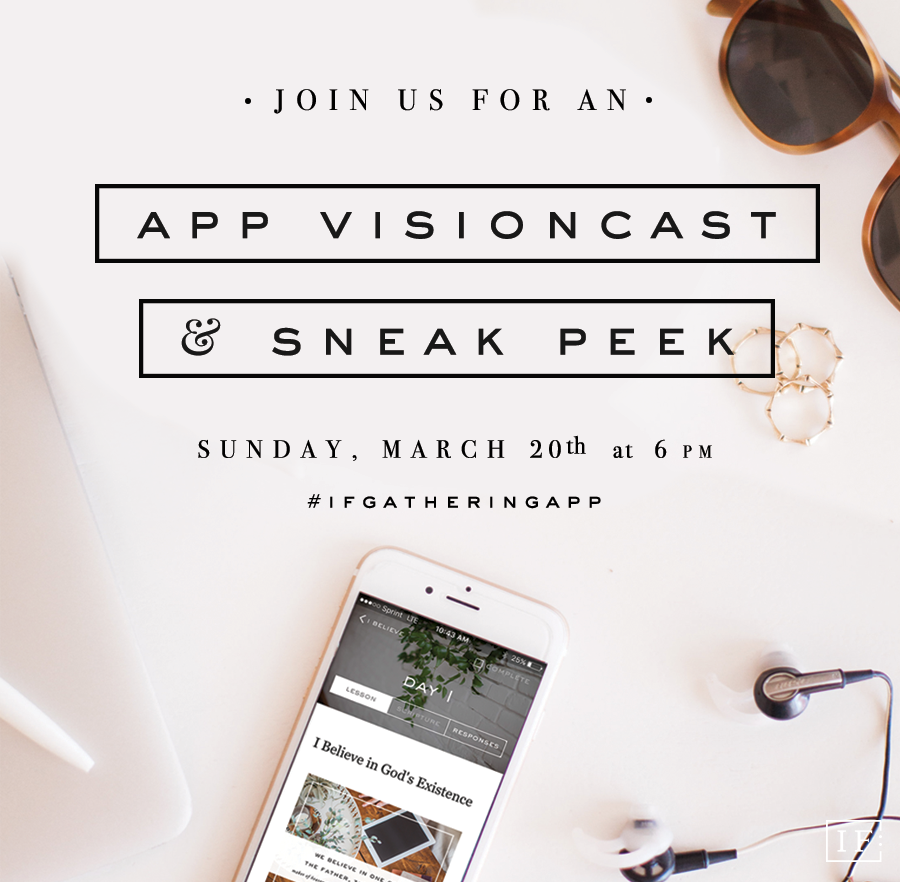 Join us for a Sunday night visioncast with IF:Founder/Visionary Jennie Allen. Learn all about the new IF:Gathering app and our I Believe study on the Nicene Creed. You also don’t want to miss the special surprise we have in store for you!

Join us 6PM Central at